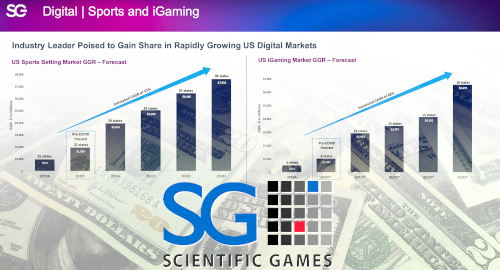 Lottery, betting and gaming technology outfit Scientific Games Corp (SGC) lost $111m in the third quarter of 2020 but the situation would have been much worse without the company’s burgeoning digital operations.

SGC’s mainstay gaming division was the dead weight on the Q3 report, with revenue falling by nearly half to $231m and earnings down two-thirds to $77m as land-based casinos remained under pandemic restrictions. The result was a major decline in active gaming machine revenue, lower shipments of new and replacement machines and less need for gaming services.

The lottery division fared far better, with revenue and earnings each up 10% to $241m and $109m, respectively. The gains came via a 20% rise in domestic instant win ticket sales and a nearly 50% rise in international product sales.

The SciPlay social gaming unit enjoyed an even bigger boost from pandemic shut-ins, with revenue up 30% to $151m and earnings rising 54% to $32m. Mobile devices drove these gains, with revenue up 36% to $132m while desktop action was flat at $19m. The number of daily average users (DAU) decreased slightly but average revenue per DAU was up more than one-third to $0.63.

The Digital segment, which includes iGaming, iLottery and sports betting, reported revenue rising 15% to $75m but earnings jumped 47% to $17m. iGaming, in particular New Jersey operations, grew 22% to $44m, while ‘sports & platform’ nudged up only $2m to $31m due in part to the slow resumption of major league activity following this spring’s pandemic halt.

With US sports betting expansion on a tear, SGC noted that its Q3 digital numbers benefited from some ‘one-time deliveries’ that aren’t likely to repeat themselves in Q4. That said, SGC has been busy bolstering its digital client roster, including a recent deal to deliver its OpenSports solution for long-term casino partner Hard Rock International in New Jersey and Iowa.

Speaking on Wednesday’s analyst call, SGC exec VP Michael Eklund acknowledged the uncertainty of a second pandemic wave hitting the casino sector, saying the company had learned hard lessons from Q2 “to get the cost structure where it needed to be” and would “reluctantly … go back there again if we have to.”

In the meantime, SGC is adapting to the new environment by developing sanitization modules that accelerate the frantic scrubbing of gear in between patrons, plus new varieties of stadium-style electronic table games with appropriate distancing between gaming positions.

SGC is also working on new ‘contactless’ systems, including cashless payments for both slots and gaming tables. SGC CEO Barry Cottle said his firm had “developed some really good IP” in the cashless realm while noting that, with about 525k slots and 5k tables across its network, “we’re already a part of that last mile … between the wallet and the slot.”

Cottle said “two large corporate customers” would likely start deploying SGC’s cashless system before the year is through. Cottle claimed cashless gaming would offer SGC “multiple stream revenue, which is a combination of some upfront hardware along with software licensing, maintenance, etc.”

Cottle briefly acknowledged the company’s decision last month to withdraw from the Brazil instant lottery privatization it thought it had secured with joint venture partner International Game Technology. Cottle said SGC hadn’t made a “material investment” in Brazil but would “continue to explore opportunities in the country.”