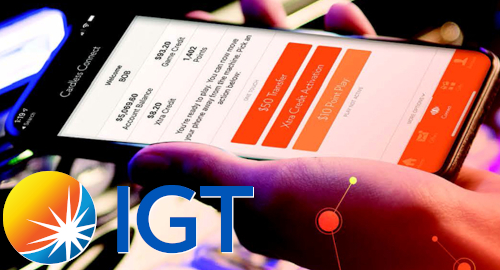 Cryptocurrency-funded slots play may be coming to a land-based casino near you after International Game Technology (IGT) received a patent for expanding existing machine-based payment options.

On Tuesday, Bloomberg reported that IGT had received a patent for a method of transferring funds from an individual’s cryptocurrency wallet to a casino loyalty/rewards account. IGT, one of the casino sector’s primary developers/manufacturers of electronic gaming machines, has yet to comment on the report.

IGT did announce Tuesday that it had successfully cleared the final stage of Nevada regulatory approval for its Resort Wallet carded cashless module. The system allows players to use a casino loyalty card to transfer cash between a secure digital wallet and various gaming products – slot machines, gaming tables, sportsbooks, etc. There’s also a phone-based ‘cardless cashless’ version of the Resort Wallet.

IGT’s patent is the latest move by the US land-based gaming industry toward a cashless environment, which has the backing of the gambling sector’s primary lobby group. The shift has taken on more urgency and offered more appeal as the pandemic made the idea of handling cootie-contaminated cash seem even more ill-advised.

Bloomberg opined that the IGT patent would have the most appeal for younger gamblers, who are more familiar with new technologies and less averse to change than the blue-haired rinse set that previously made up the bulk of US slots jockeys.

While the Bloomberg report specifically cited Bitcoin as a beneficiary of IGT’s new patent, that could prove problematic for users of so-called Bitcoin Core (BTC), the value of which is currently at an all-time high following the technology’s most recent speculative bubble.

BTC’s hidebound adherence to the original 1Mb blockchain block-size puts an artificial cap on the number of transactions the technology can process with any speed. This is fine when all you want to do is buy and hold a function-free commodity, but it’s a disaster when you actually want to use the product in the role for which it was originally created.

The average transaction fee on the BTC network was over $9 on New Year’s Day 2021, which is a mere fraction of the nearly $60 peak during the infamous 2017 BTC bubble. But keep in mind that the 2017 bubble was driven primarily by small-time retail speculators, whereas the current bubble is reportedly being driven by institutional HODLers making much larger purchases, so the number of individual transactions is currently well below that 2017 logjam.

So even if BTC should defy logic and become a popular form of payment for all manner of goods and services, it would be accompanied by what many would view as a prohibitive toll. Honestly, would you pay $60 to transfer $100 from your crypto wallet to your casino account (and then pay an additional fee to convert that crypto to fiat for game play)?

Fortunately, the Bitcoin SV (BSV) technology seeks to preserve Bitcoin’s original vision by dramatically expanding the block-size limit, enabling it to handle the significant volume of transactions required by any functional currency.

Apart from that, BSV’s scalability makes it the world’s most powerful data management tool, a perk that the ‘digital gold’ crowd can’t hope to match. Check out the unparalleled all-you-can-transact smorgasboard of benefits that BSV has to offer the gaming sector here.