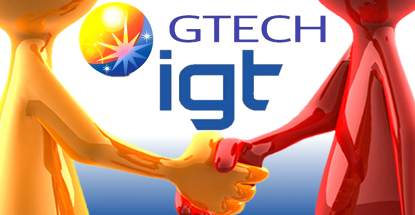 Italian lottery and gaming technology firm GTECH has inked a deal to acquire US-based gaming device maker International Game Technology (IGT) for $6.4b. Rumors that IGT was on the block first surfaced last month with GTECH quickly tipped as the most likely lad to seal the deal. The two companies are heralding the deal for creating what GTECH described as the “world’s leading end-to-end gaming company.” The new combined entity is expected to boast annual revenue of over $6b and earnings over $2b. Reuters reported that the deal marks the biggest foreign acquisition by an Italian company to date in 2014.

Under the terms of the deal, which expects to be completed by Q1 or Q2 of 2015, GTECH will pay $4.7b in cash while assuming $1.7b in IGT debt. The deal calls for the establishment of a new UK-based holding company that will list itself on the New York Stock Exchange, while IGT and GTECH will cease trading on their respective exchanges. GTECH will own 80% of the new firm – currently dubbed NewCo but expected to eventually be renamed GTECH PLC – with IGT shareholders holding the remaining 20%.

GTECH CEO Marco Sala will head the new entity, while current IGT chairman Phil Satre will act as chairman and IGT CEO Patti Hart will serve as vice-chairwoman. Sala said the deal would “increase our global scale” as there was “limited overlap in products and customers” between the merging firms. Hart described the pact as the “opportunity to create a global market” that came as the “result of our exploration of strategic alternatives to maximize shareholder value.”

In March, IGT laid off 7% of its workforce in a bid to counter stagnant revenue. Further cuts may occur as the NewCo entity embarks on a three-year transition period in which they expect to realize $280m in “synergies.” GTECH, which operates in around 60 different global jurisdictions, has about 8,600 employees on its payroll.

The pace of consolidation in the gaming equipment sector has been brisk over the past few years, with Scientific Games Corp paying $1.5b to acquire WMS Industries, Bally Technologies paying $1.3b for SHFL Entertainment and, most recently, Aristocrat Leisure’s $1.3b acquisition of Video Gaming Technologies.