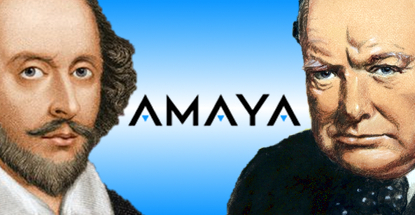 Well, that was fast. Just two days after receiving a favorable nod from shareholders, Canada’s Amaya Inc. (formerly Amaya Gaming Group) has announced it has officially completed its $4.9b all-cash acquisition of the Oldford Group, the parent company of the Isle of Man-based Rational Group, which counts among its holdings the online gambling sites PokerStars and Full Tilt and live poker events including the European Poker Tour.

Amaya CEO David Baazov issued a statement describing his firm as “extremely pleased” to have put the paperwork behind them. Rational Group founder/CEO Mark Scheinberg noted that while “myself and other founders are departing,” they were happy to see the company “transferred to strong new ownership.” Baazov praised Rational’s core values of ‘intergrity, customer focus and challenge” while pledging to “maintain this culture” in order to “continue growing this world class business.”

Stars spokesman Eric Hollreiser announced the deal’s completion by tweeting “The end of the beginning – we are now part of Amaya Gaming.” Hollreiser was quoting Winston Churchill, who, looking to temper expectations following the Battle of El Alamein – the first major World War II battle in which the Allied forces won a decisive victory against the German army – said this: “Now this is not the end. It is not even the beginning of the end. But it is, perhaps, the end of the beginning.”

Amaya’s previously announced target for completing the acquisition had been sometime in September, but Baazov has well demonstrated he’s not one to let the grass grow under his feet. If Hollreiser can quote Churchill, Baazov’s competitors might well quote the King of France in William Shakespeare’s Henry V, whose council with his ministers over how best to handle the invading English army is interrupted by Henry’s emissary come to deliver his king’s demands. Notes the French king with some trepidation: “You see this chase is hotly followed.”

Earlier this week, Boyd Gaming CEO Keith Smith was celebrating his New Jersey online gambling site’s market dominance, which, when combined with the PartyPoker site of Boyd’s technology partner Bwin.party digital entertainment, “holds a 10 point lead on our nearest competitor.” Scuttlebutt has it that New Jersey regulators are poised to announce the imminent entry of Stars and Tilt into the state’s regulated online gambling market. Bwin.party shares closed Friday’s trading down 1.2p to 84.75p after trading as low as 83p. The company’s stock price has fallen around 30% since Amaya announced its Stars acquisition. The end of the beginning, or the beginning of the end?