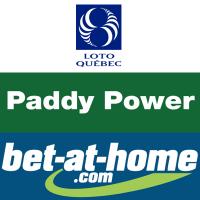 Canadian provincial operator Loto-Québec posted a rise in both revenues and earnings for the second quarter of the fiscal year. Revenues hit $917.4million, up 1.9 percent with overall earnings increasing 2.5 percent to $344.4m with the company paying tribute to “good business performance” and “tightly controlled expenditures”. Both numbers were considerably better than the first quarter and meant there being no need to scrabble around to find an excuse for poor performance.

EspaceJeux.com, their online gambling site, returned almost identical performance to Q1 with “sales” coming in at $5.2million – a rise of 24.9 percent compared with the previous year. Still no more detail apart from the sales figure, meaning that we have no idea how their poker and sports betting offering have fared since being introduced in the past year.

Paddy Power has signed a two-year deal to become the Welsh Rugby Union’s (WRU) official betting partner. The betting company will offer Welsh rugby fans special betting deals ahead of matches via the WRU website and is to supply betting outlets at the Millennium Stadium at all matches. Paddy Power spokesperson Rory Scott added: “We’re thrilled to be working alongside the Welsh Rugby Union as the official betting supplier. Not only do we share a host of common values including passion and commitment, we each strive to entertain our fans and customers with a dab of flair and dollop of match-winning creativity and excitement.”

Bet-at-home.com has extended its sponsorship of a top tennis event for a further two years. The BetClic Everest Group subsidiary will be title sponsor of the ATP 250 Series event in Kitzbühel and it will become known as the bet-at-home.com Cup Kitzbühel. It was originally known as the ATP Austrian Open and is the latest in a number of deals that has seen bet-at-home become a regular at tennis and sporting events across Europe.