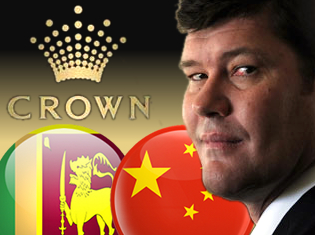 Chinese casino gamblers are transforming the world and Crown Resorts Limited chairman James Packer couldn’t be happier. Speaking at the Australian casino operator’s annual general meeting in Melbourne this week, Packer said the sheer scale of the social and demographic shifts currently underway in China are “extraordinary and hard to fully conceptualize.” Packer said China’s burgeoning middle class is already nearly equal to the total population of the United States and is projected to top 1.4b – nearly double the combined US and European middle class consumer population – by 2030. Packers suggested this human onslaught will “profoundly alter every aspect of our economy.”

Packer cited UN World Tourism Organization stats showing the number of Chinese residents traveling abroad rising from 10m in 2000 to 83m in 2012, and those 83m spent $102b in the process (a global high). Packer also noted a 2011 McKinsey study projecting China would account for one-fifth of the global luxury goods market by 2015, as well as US investment analyst Marc Faber’s research that 80% of Chinese tourists visit a casino on their first trip abroad. Packer humble-bragged that Crown’s “growing reputation as one of Asia’s leading luxury brands” made it uniquely qualified to cater to a rapidly swelling gambling-mad demographic with a taste for the finer things.

PACKER ASKS SRI LANKA TO HELP CROWN HELP SRI LANKA
Packer also has an eye for tourists from China’s equally giant neighbor, India. For the better part of a year now, Packer has been maneuvering to build an integrated resort on Beira Lake in Sri Lanka’s capital Colombo. Packer told the AGM that the island nation had “huge tourism appeal” and the proposed Crown Sri Lanka resort could play “a significant role” in making the country the next “mass traveller market.” However, the only update Packer provided on the stalled project was that the company was in “final negotiations” with “potential joint venture partners and the Sri Lankan government.” Packer remained hopeful that parliamentarians would resume and conclude debate on the relevant legislation in November.

But opposition politicians opposed to the casino legislation’s favorable tax concessions – which also apply to Colombo’s other deep-pocketed casino hopeful, John Keells Holdings – aren’t in a conciliatory mood. The conservative United National Party (UNP) is planning a public protest in Colombo on Nov. 7 in which UNP members will join hands with members of other opposition parties outside Fort Railway Station and then, uh, it’s not clear. UNP General Secretary Tissa Attanayake told the media the aim of the demonstration was not simply to get the government to amend the casino legislation, but to scrap it entirely.

Meanwhile, other UNP members have established a committee to examine the impact of the country’s existing casinos and sports betting operations. The Colombo Page quoted parliamentarian Ajith P. Perera complaining that police actions earlier this year had been directed at “small scale gambling dens” while ignoring the more visible “large scale casinos and bookies.” Perera also claimed to be shocked – shocked! – that none of these operations held a formal gaming license, ignoring the fact that it’s hard to pass legislation to issue such licenses when opposition parties spend much of their time hanging out in front of train stations holding hands with other men.