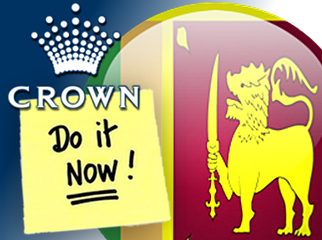 It appears Australian casino operator Crown Ltd. will get its Sri Lanka gaming joint after all. Late last month, government officials told Lake Leisure Holdings – the joint venture of Crown and local partner Rank Holdings – that their proposed $350m resort-casino couldn’t be built on its chosen spot in Sri Lanka’s capital Colombo unless its design underwent certain ‘aesthetic’ modifications, such as lopping off the top section of the 36-storey structure. The only other option presented was to move the entire project to another location where it wouldn’t block the view of Colombo’s beloved Beira Lake. Crown CEO Rowen Craigie and CFO Ken Barton flew out to personally remonstrate with Sri Lankan officials, but early reports claimed the executive lobbying had failed to win any hearts and minds.

Well, don’t believe everything you read. On Sunday, the Colombo Page quoted Investment Promotion Minister Lakshman Yapa Abeywardena saying that the Crown Colombo project was good to go in its original location opposite Lake House on D.R. Wijewardena Mawatha. However, Abeywardena confirmed that the project would now follow the advice of Defense and Urban Development Ministry Secretary Gotabaya Rajapaksa, who had suggested splitting the hotel section into two towers to allow unobstructed sightlines of the lake. With that out of the way, the gaming joint is back on track to accept its first wager when it opens in 2016.

On the same day, the Sunday Times reported that an unidentified “top Chinese investor linked to a casino group in Las Vegas” was lobbying Sri Lankan authorities to take control of a stalled project on a different D.R. Wijewardena Mawatha property. A ‘senior government official’ told the Times that the unnamed Chinese gamer wants to develop – wait for it – a hotel-casino complex on the property. The property in question is currently under the control of the Krrish Group, but the Delhi-based commercial construction outfit is allegedly having difficulty making its lease payments. As for the identity of the Chinese investor and the Vegas casino outfit, Pansy Ho and MGM Resorts are already joined at the wallet in Macau, but our money’s on Caesars Entertainment using a Chinese frontman in order to avoid a repeat of its fiasco in South Korea, where its bid for a casino license was rejected on concerns that the company might collapse under the weight of its $23.7b debt load before the casino was up and running.