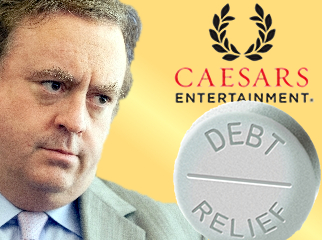 Full-time debt-servicing organization and occasional casino operator Caesars Entertainment narrowed its losses in Q2 2013, despite revenue taking a slight dip. The company reported a net loss of $212.2m for the three months ending June 30, an improvement over the $241.7m lost in the same period a year earlier. But interest charges on Caesars’ crippling $23.7b in long-term debt hit $540.1m in Q2, up from $496.5m last year.

Food and beverage revenue in Las Vegas rose 9.9%, while room revenue rose 6.3%. This is in large part due to the imposition in March of airline-style ‘resort fees’ on everything from fitness centers to internet access to local phone calls. CEO Gary Loveman (pictured above, gazing longingly at that elusive magic pill) claimed these fees – which added “something like $10m to $15m” to Caesars’ top line – had had “minimal impact” on occupancy levels, but Caesars’ rooms in Vegas were 1.3% less full in Q2.

Loveman said those crazy kids these days just don’t gamble like their parents, and Loveman believes this trend will be “with us for a long time to come.” So the plan is to offer these non-gambling twenty-somethings more reasons not to gamble at Caesars properties by boosting non-gaming amenities such as the High Roller ferris wheel currently under construction on the Las Vegas Strip. Asked whether it was really all that wise to give customers extra reasons not to set foot on Caesars’ gaming floors, Loveman argued that he was trying to “pull customers out of our competitors’ casinos.”

As for the soon-to-be-spun-off Caesars Interactive Entertainment (CIE) division, the company again bundled all CIE numbers into its catch-all ‘other’ category, which saw revenue rise 14.2% to $86.4m. However, Eliers Research managing director Adam Krejcik estimated that CIE’s social gaming revenue came in at $71.4m, up 44% year on year and 7% sequentially.

Over in Asia, where Caesars owns land but no casinos, the company had no updates to offer on the sale of its 175-acre golf course in Macau, other than to say it was still negotiating with interested parties. Loveman also referenced the recent decision by authorities in South Korea to reject Caesars’ bid to develop an integrated resort in Incheon. Loveman said the company was still considering whether to file an appeal, but since the Koreans were reportedly uneasy about Caesars’ debt-load threatening its ability to see the project through to completion, it’s hard to see how Caesars could sufficiently polish this turd.