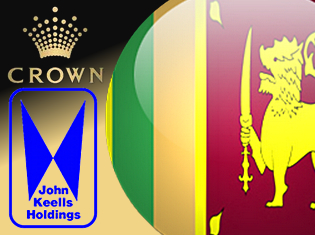 Sri Lanka’s Cabinet of Ministers has formally given its blessing to two resort-casino projects in its capital Colombo. Among those popping champagne corks today are Lake Leisure Holdings, the joint venture of Australia’s Crown Ltd. and local casino operator Rank Holdings, which has proposed a $350m casino-hotel opposite Lake House on D.R. Wijewardena Mawatha that will operate under the name Crown Colombo.

The other casino is the baby of local hotel/tourism outfit John Keells Holdings (JKH), which has promised to spend up to $850m to develop a space in Colombo’s new casino zone not far from Crown’s project. JKH has reportedly enlisted the help of a foreign casino firm to run the project’s gaming operations, but the identity of this company has yet to be disclosed.

It was previously understood that both JKH and Crown’s casinos would operate using gaming licenses transferred from small-scale casinos currently doing business in Colombo, but Xinhua quoted cabinet spokesman Kehelliya Rambukwella saying “the finance ministry together with the excise department has issued gaming licences” to the projects. Gaming licensees are required to pay the government an annual fee of Rs 50m (US $377k).

Thursday’s announcement, which was expected weeks ago but was put on hold while Crown Colombo’s design details underwent some necessary tweaking, clears the way for the two projects to start moving earth. Both projects expect to open for business by 2016. Having been designated ‘mixed developments’ by the government, the hotel portion of each project will enjoy a 10-year tax holiday under the Strategic Development Project Act. Xinhua reported that following the projects’ first decade in operation, they would be required to pay 6% tax – just half the tax rate imposed on similar businesses – for the next 12 years. (AFP reported the duration of this sweetheart rate was 15 years.) The projects will also enjoy exemptions from value added tax, customs duty and other assorted fees and levies.

These concessions aren’t sitting well with some opposition politicians, including MP Harsha de Silva, who had criticized the tax breaks as early as this March. Da Silva, an economist by trade, said Sri Lanka would go “into the record books as the first country in the world that exempts casinos from tax.” Parliament must still approve the government’s plan, but given that the government holds a majority of the votes and the casino projects are expected to generate direct employment for up to 6,500 Sri Lankans during their construction phase and thousands more once they’re up and running, the proposal is expected to pass without significant alteration.