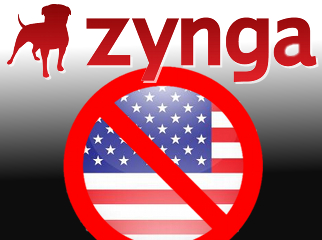 Social gamers Zynga have nixed plans to pursue real-money online gambling opportunities in the United States. The company dropped the bombshell as part of its Q2 earnings report, which saw Zynga’s revenues fall 31% to $231m, resulting in a net loss of $15.8m for the three months ending June 30. In a statement accompanying the report, new CEO Don Mattrick said Zynga needed to “get back to basics” and take “a longer term view on our products and business.” Mattrick said Zynga expected “more volatility … than we would like over the next two to four quarters.”

The day’s biggest source of volatility came via Zynga’s statement that it believed “its biggest opportunity is to focus on free to play social games.” Zynga “continues to evaluate” the “test” of its UK-facing real-money gambling tie-up with pan-European operator Bwin.party digital entertainment, but Zynga had made “the focused choice not to pursue a license for real-money gaming in the United States.” Instead, Zynga intends to “evaluate all its priorities against the growing market opportunity in free, social gaming, including social casino offerings.” Last month, Zynga acquired games developer Spooky Cool Labs, whose lead designer Joe Kaminkow is something of a slot machine legend.

While Zynga shares closed out the day up nearly 7% to $3.50 – buoyed in part by Facebook’s positive report the day before – the US real-money gambling backtrack has sent Zynga’s shares into an after-hours freefall, off nearly 14% at time of writing. The question now becomes: what prompted Zynga’s real-money about-face? (Oh, right…) Zynga execs barely mentioned the subject in their post-earnings call with analysts, sticking to their mantra that it was a matter of regaining “focus.”

Zynga had already started its pursuit of a preliminary finding of suitability from Nevada gaming regulators and – prior to his stepping down from the CEO role at the end of June – Zynga founder Mark Pincus barely went a week without at least alluding to the untold riches that would assuredly be Zynga’s when it began taking real-money wagers on its popular Zynga Poker and casino products. Such talk was usually sufficient to arrest Zynga’s post-IPO share price decline, but having continually sown the wind, Pincus is now reaping the whirlwind of investor dissatisfaction.

FORGET DRAW SOMETHING… DO SOMETHING
Leaving aside gambling for the moment, Zynga’s player base contracted yet again during the past three months. Daily active users (DAUs) fell to 39m, off 45% from its 72m peak last year and down 24% from Q1. Monthly active users (MAUs) fell to 187m, down 39% year-on-year and 26% sequentially. Unlike Facebook, Zynga continues to struggle to attract the growing ranks of mobile users, as its web/mobile split came to 23m/16m for DAUs and 129m/57m for MAUs.

Over the past year, Zynga has been furiously tossing ballast (aka employees) overboard in order to reduce the volumes of red ink on its books. The company’s status as the interwebz top social gaming company has been usurped by companies like King and Caesars Interactive Entertainment, which have been far more adept at moving into the mobile space than Zynga. This time last year, Zynga had seven of the top-10 Facebook games; that number has since shrunk to three. Forbes’ Tero Kuittinen spoke for many industry observers when he said Zynga’s “house is on fire.” As well as Pincus’ pants…