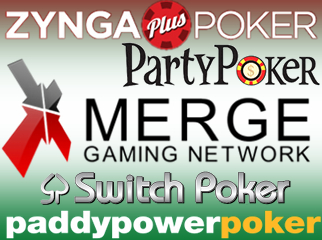 It’s been a week since social gamers Zynga launched their UK-facing ZyngaPlus real-money poker and casino sites in partnership with pan-European online gambling operator Bwin.party, and the initial reports are less than encouraging. ZyngaPlusPoker is essentially a skin of Bwin.party’s PartyPoker, and according to a certain online poker traffic monitoring site, PartyPoker’s seven-day average cash game player numbers have fallen nearly 5% since the ZyngaPlus launch. This has allowed both Full Tilt Poker and Playtech’s iPoker to leapfrog PartyPoker on the depth chart behind market behemoth PokerStars, hardly the outcome either Zynga or Bwin.party were expecting. (ZyngaMinus?) Then again, that traffic monitoring site’s numbers are notoriously suspect, so the Zynga/Party honeymoon may not be off to as quite a dismal start as it’s been portrayed.

Two skins on the Merge Gaming network – Bulldog 777 and GR88 – have been offline for over a week, leading to suspicions that the two sites had become the latest to (a) ditch the troubled Merge for greener pastures or (b) go gentle into that good night. The sites have since informed PokerAffiliateSolutions that they never intended to ditch Merge but were simply revamping their software to accommodate new affiliate platforms. Both sites have pledged to be back up and running by Thursday (11).

It may just seem like every news item surrounding Merge is negative, but the network appears determined to balance out the negativity with some positive word of mouth. As such, it has announced a guaranteed prize pool of $2m for the upcoming Poker Maximus V tournament series, a significant step-up from the $1.2m guarantee that accompanied February’s Poker Maximus IV. The 11-day tourney gets underway in May and will feature a minimum of four events per day, including the $215 buy-in, $250k guaranteed main event.

Paddy Power Poker has launched its Viva Las Vegas promo, offering $5k packages to the 2013 World Series of Poker in Las Vegas. There are three ways to qualify, including Weekly Finals, the Big Final and the WSOP Warrior Leader Board. Full details available at the Paddy site, but the prize package includes seven-nights in a Palazzo/Venetian luxury suite, $2,250 in spending money plus a $1,500 buy-in to Event #60 on July 4, a seat at the Paddy Power Poker Tournament and, er, liquid refreshments.

Finally, a player at Bitcoin-friendly poker site Switch Poker has become a millionaire by doing absolutely nothing. CardPlayer reported that the player converted €150k in his Switch Poker account to Bitcoins over the past year, purely as a way of ensuring quick access to his funds. But the player, who for obvious reasons doesn’t wish to be identified, left his Bitcoins on the site, while the value of the things skyrocketed to around €1.2m. As a Switch Poker spokesperson put it, “not too shabby.”