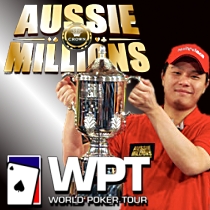 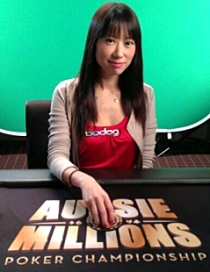 Final table play was halted after 15 hours of play with just Chan, Cabret and Antonius still in the hunt. Play reconvened following a 12-hour break and just half an hour in, Chan’s jacks reduced Antonius to a single big blind. Antonius bowed out soon after in third place, earning $600k, leaving just Chan and Cabret to duke it out, and you know how that ended.

Andy Hwang has won the World Poker Tour Borgata Winter Poker Open. The 27-year-old poker pro from Texas overcame a 1,042-strong field over five days of play in Atlantic City to earn a healthy $730k, a WPT trophy and a $25k seat at the WPT World Championship at the Bellagio in Las Vegas this May. James Anderson earned $438k for being the last to fall at Hwang’s hands, while the rest of the six-handed final table finished thus: Mike Gogliormella ($265k), Matt Haughen ($222k), Jeremy Druckman ($182k) and Matthew Salsberg ($147k). Next up for the WPT stateside is the Lucky Hearts Poker Open starting Feb. 8 in Hollywood, Florida, while over in Europe the WPT Vienna kicks off Feb. 19.

The UK & Ireland Poker Tour will kick off its fourth season at the Casino Marbella in Spain of all places, which sort of makes a mockery of the Tour’s name. The Spanish event, which runs June 13-17, will be a joint effort with the Estrellas Poker Tour, so think of it as an exchange program. The other four announced UKIPT stops are Galway (Aug. 8-12), London (Oct. 2-6), Isle of Man (Oct. 31 – Nov. 4) and a 6-max in Nottingham (Nov. 28 – Dec. 2). Buy-ins have been raised from £770 to £1k, but PokerStars has put a £500k guarantee on each main event’s prize pool, meaning every winner will emerge clutching at least £100k to his or her sweaty bosom.

Online poker players are reminded that this weekend marks the kickoff of the online qualifiers for the International Stadiums Poker Tour (ISPT). Enter now or forever hold your peace, because the troubled ISPT’s inaugural event could well be its last. Unless, it turns to have all been a dream…