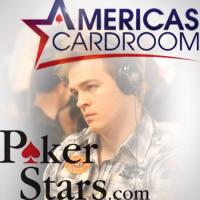 If there ever was proof that poker is a game of multiple chances, Andrew Robl proved that during the recent Aussie Millions $100k Challenge when he won first place despite being the first player eliminated from the competition. Thanks to a new wrinkle in this year’s event that allowed re-entries, Robl took advantage of the new rules, bought himself back into the competition, and somehow ended up winning the whole thing.

In the end, Robl outlasted Igor “Lechuckpoker” Kurganov to lay claim to the title and the $1 million first prize it came with. Despite falling in the heads-up duel, Kurganov still took home huge cash winnings of $610,000. Japanese pro Masa Kagawa came in third and pocketed $320,000 while former winner Dan Shak finished 4th with $237,000 in winnings.

In addition to Shak, Robl joins an illustrious list of some of the best poker players in the world that have won the Aussie Milions $100,000 Challenge: Dan Smith, Sam Trickett, Howard Lederer and Erick Lindgren. That’s tremendous company for Robl, who made quite a name for himself despite having to spend $200,000 for the two buy-ins. In the end, though, we reckon he didn’t mind spending the extra $100K.

PokerStars was caught with its pants down following the 2013 PokerStars Caribbean Adventure “Zoom Challenge” after some players were on the receiving end of “unfair advantages” stemming from a confusing rule change in the middle of the tournament.

According to PokerFuse, the confusion began when some of the players complained about a change in the tournament’s operational structure that allowed for several players to participate in a group, against each other. This was in contrast to rules on previous days that only allowed players to participate alone or in pairs. In the end, the advantage given to the groups ended up manifesting itself in the final standings with four of the eight money finishers coming from two separate groups of five players.

To their credit, Stars was quick to acknowledge and remedy the issue, compensating affected players who previously lost out on the money because of the sudden change in results. In the end, four additional players have been given $2,360 each while three other players received additional bonuses of the same amount.

“Sometimes in the preparation for a promotion you don’t think of all the angles and we didn’t think of all of them this time. We’re sorry,” PokerStars official Lee Jones said in a statement addressing the controversy.

Everybody knows that PokerStars is one of the best run online poker outfits so you can chalk this incident up to just a minor boo boo.

As far as generosity is concerned, no online poker outfit has been as giving as America’s Cardroom after the poker site reported giving out a record $1.3 million in prize pool money from its $1 million guaranteed online poker series, OSS II. As the company’s signature online poker series, America’s Cardoom initially reserved $1,088,000 in guaranteed money for the two-week poker series. But after an overwhelming turnout from players, that guaranteed prize pool reached $1,308,702.49, easily becoming the most rewarding tournament series in Americas Cardroom’s history.