Vanessa Selbst won the $25,000 PokerStars Caribbean Adventure Super High Roller event this week. She earned more than $1.4 million for her first tournament victory of 2013, boosting her total career earnings just north of $7 million. Oh, and it also made her the winningest woman in the history of tournament poker. 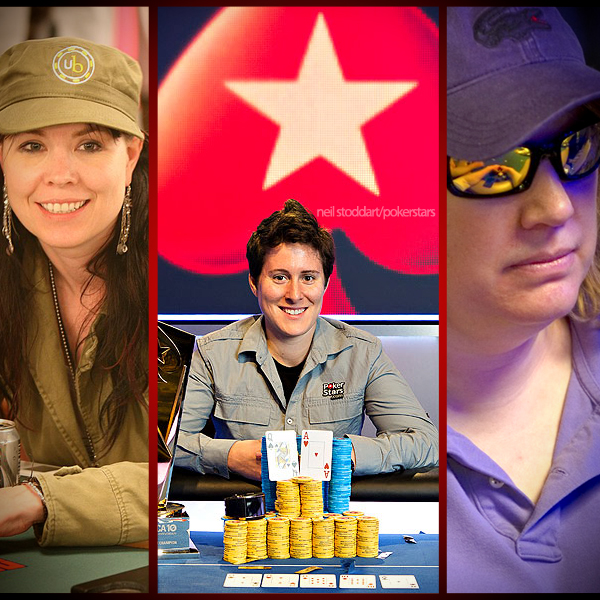 In sports there are players whose path to the Hall of Fame is evident after just a few season. Selbst is one of those talents who, if she plays long enough, seems destined to earn her place in the annals of the game’s greats. The skill level of the game has advanced a lot since the boom, and Selbst has not just won since then but has done so consistently and in dominant fashion.

Still just 28 years old, Selbst has been excelling on poker’s biggest stages since 2006 when she made her first WSOP final table appearance. Her breakthrough year came in 2010, when she won the NAPT Mohegan Sun main event and then steamrolled the final table of the Partouche Poker Tour’s main event later that fall. That lifted her to more than $3.7 million in lifetime earnings, within sight of the career numbers of two women from the generation before her, and really ramped up the talk about whether Selbst might be the best woman poker player in the world – talk which seems, for the moment, to finally be settled.

Two of the women passed on the money list in the last two years couldn’t be more different from each other in substance or style.

For a long time, the gold standard for women in tournament poker was Annie Duke. At least, it was during the poker boom when poker media was in its infancy and much of the narrative of the game was being driven by ESPN’s newly expanded coverage of the WSOP. Duke, the bubble girl at the 2000 WSOP Main Event, was mentioned time and time again as the top female player in the game, mostly based on that notable but ultimately singular accomplishment and the fact that she had won one gold bracelet during the summer of 2004. Then the interview segments of the shows would conveniently ask her what it was like to be such an awesome woman poker player, allowing her to say something to the effect of, “I don’t think of myself as a woman poker player, just a poker player.” That’s a nice storyline, especially in the naive atmosphere of the poker boom, but the thing is that Annie wasn’t even the best woman poker player around at the time. If the producers had wanted that role filled correctly, they would’ve sought out Kathy Liebert, who had also won a bracelet that summer.

Liebert and Duke both began cashing in Las Vegas tournaments in the same year, 1994. Both had early success, too: Duke cashed for more than $97K that year, Liebert for $52K. The big difference was where they cashed. Annie Duke did so mostly at the WSOP; just 9 of her 24 cashes in the ’90s came in locations other than Binion’s Horseshoe. She was around the heart of the poker world, and the future epicenter of the poker boom. Kathy Liebert, meanwhile, racked up 61 cashes during the same decade by beating up on the fringe of the poker world, small casinos from Vegas to L.A. where nobody was watching and taking notes. By the time the 2000s rolled around, Liebert had won more than $450K playing in the fringe, while Duke took down $370K in front of everybody in poker who mattered.

In 2002 Liebert won the PartyPoker Million, becoming the first woman to win $1 million in a poker tournament and finishing third on the worldwide money list for the year.  Duke continued to cash in tournaments but didn’t enjoy capital-S success until she solidified her TV-anointed reputation at the WSOP’s 10-player, winner-take-all, invitation-only Tournament of Champions.

There was no clear criteria for admission to the tournament – it was more of a made-for-TV spectacle of “the world’s greatest players.” Most of the lineup was a murderer’s row. Living legends Doyle Brunson, Chip Reese, Johnny Chan, and T.J. Cloutier  – the most accomplished players of the older generations – were there. Phil Hellmuth, Phil Ivey, and Daniel Negreanu – the sort-of-new and new guards – were there. The then-reigning world champion, Greg Raymer, was there. And then there were Howard Lederer and Annie Duke, who had spent the last decade-plus at the WSOP, getting to know all the right people.

Duke was included in the TOC lineup and, to her credit, she beat those 9 players in the single-table format. But when her $2 million prize had her being trumpeted as the world’s greatest woman poker player, it wasn’t right. Kathy Liebert had already won more than $300K in excess of Duke’s prize in her entire career, one cash at a time, and none of her prizes came from invitation-only events. To this day, Duke’s only two tournament prizes worth at least $167K ($2.5 million between the TOC and the NBC Heads-Up Championship) have come in made-for-TV, invitation-only events. Liebert has six wins worth at least that much, including three World Poker Tour final tables, and every last one of them has come on her own money against an open field. That makes Liebert’s $5.855 million in career earnings vastly more impressive than Duke’s $4.27 million.

There was a time when I could’ve seen Annie Duke, Celebrity Apprentice runner-up and ever the saleswoman, talking herself into the Hall of Fame someday the same way she talked herself into that Tournament of Champions with the legends of poker back in 2004. It’s unlikely to happen now without some serious image rehab following the Epic Poker League’s crash-and-burn act. As for Kathy Liebert, I don’t think there’s any question at all that Kathy Liebert deserves to be in the Poker Hall of Fame. Her biggest achievements have come against top competition and her record stands on its own against anyone else of her generation and everyone other than Selbst who has come after her. In a just world she’ll get her due, but it might be a long time before she does. She wasn’t even included on last year’s ballot.

Kathy Liebert was already a millionaire before she was shut out of that Tournament of Champions by a less accomplished woman. She’s been far the more impressive player of the two in the intervening years, but she’s always been overshadowed in the media because she never sought out the spotlight. And unless somebody prods it into seeking her, there’s no telling how long it might take to find her. What a shame it would be if she were to continue to go unrecognized.