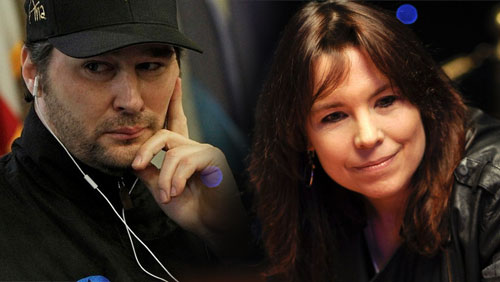 We all have a book rattling around in our ribs.

But it sticks to those bones like a bluebottle on flypaper because it’s too hard to do. I know I sound like a pussy, but it’s true. Procrastination rules. Th

e book will never get done.

Phil Hellmuth Jr doesn’t have my problem. The most decorated human in World Series of Poker (WSOP) history has written two in the past 18-months.

How did he find the time in between basketball matches to undertake such a feat?

D&B Publishing helped with his first book, a biography entitled Poker Brat. The book debuted at the WSOP, and by all accounts, it did quite well. During the marketing of that book, Hellmuth talked about his desire to write a self-help book, and he wasn’t kidding.

#Positivity: You Are Always in the Right Place at the Right Time is available on Amazon and all other good bookstores (are there any more?). Unlike Poker Brat, Hellmuth has decided to go solo with this one.

The book boils down to eight chapters based on his philosophy of positivity.

And Hellmuth draws on all of his fame to get the likes of Tony Robbins to write a glowing appraisal of the book on the back cover. If Tony Robbins has read this book, and honestly believes it’s powerful, then I will personally hunt down a Polar Bear and try to have sex with it.

I’m going to read 52 Self Help Books in 2018. I won’t be reading Hellmuth’s treatise on positivity. Fans (and I am one) may think this is a little unfair, given that I haven’t glanced at the details of his tips, but come on. Taking advice on positivity from Hellmuth would be like taking tips on morals and ethics from Joey Barton.

I see this two ways.

On the one hand, Hellmuth must be doing something right. He has created a fantastic life for himself without having to move up the gears like a Fedor Holz. So there is some element of positivity in play here. And knowing the guy during my brief interactions with him, there is a stubborn belief that he is a demi-god the likes of which I have never seen before.

But then you watch him play.

All of his advice goes out of the window as he repeatedly loses his shit over moves that are as mundane to the average player as lollipops and crisps to a 16-year-old.

You wait until someone tells him that Maria Konnikova is in town robbing him of his glory of being the only poker player to have written a New York Times bestseller (she has two).

Thinking in Bets: Making Smarter Decisions When You Don’t Have All The Facts

Sticking with the old school vibe and the former Duchess of Poker, Annie Duke also has a new book out.

Duke plays slightly less poker than Hellmuth these days (none) but is becoming a big deal in the public speaking arena where she delivers speeches on Decision Strategy.

Most of her business concepts come from her experiences in poker, where she was once thought of as the world’s top female, earning over $4.2m playing live, including $2m for winning the ten-handed WSOP Tournament of Champions in 2004 (what a life).

Duke has partnered with Penguin Random House to publish the book. Here are the six chapter titles:

There is also an Introduction entitled: Why This Isn’t a Poker Book.

A bet is about an uncertain future.

Thinking in bets starts with recognising that there are exactly two things that determine how our lives turn out: the quality of our decisions and luck. Learning to recognise the difference between the two is what thinking in bets is all about.

Duke is not messing about.

The Kindle version costs $16.97, but there is more chance of me reading this than a Phil Hellmuth book on positivity.

Finally, top poker publishers D&B Publishing have launched an online poker magazine. The most prolific poker author of all time, Jonathan Little, will manage the site as the editor-in-chief. The team plan to roll out a minimum of three pieces of content per week, including excerpts from their broad range of poker books.