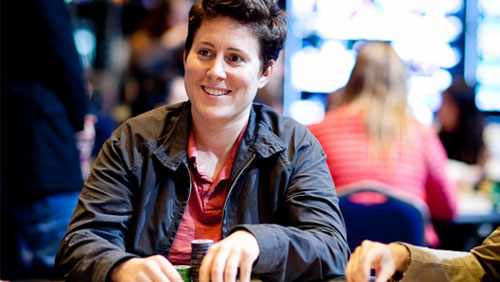 Vanessa Selbst, who “retired” from poker at the beginning of 2018, hasn’t given up the game completely. She has been seen at a couple of tournaments over the course of the past six months, and even suggested to Phil Galfond that the two should hook up for the WSOP’s Tag Team event. Selbst is now back in Las Vegas for this year’s WSOP, and has announced that she will play in at least one tournament, with half of her winnings going to a charitable cause.

In a Twitter post, Selbst announced her return to Sin City and the WSOP, saying, “I’m heading out to #WSOP for this weekend and then the main. In honor of the monsters in our gov’t, I will do a matching campaign for 50% of my WSOP profits to groups that support immigrant communities like @MaketheRoadNY. Pls join in pledging what you can at this critical time.”

The only tournament verified so far is the Main Event next month. Selbst, with over $11.8 million in live-action winnings, is one of the most prolific female players in poker history. However, her return to the action this year has found her facing off against a new breed of poker players and she hasn’t yet been able to find her groove.

It would appear that Selbst hopes to use her position and fame to support a political agenda. Her cause is at the forefront of a national debate over immigration that has resulted in a number of protests and some serious tongue lashings in social media. According to some reports, around 2,000 immigrant children of undocumented parents in the U.S. have been detained at the border between the U.S. and Mexico, leading to the children being separated from their parents. That separation has now been eliminated, as President Donald Trump signed a bill that prevents children from being separated from their families.
The tweet by Selbst caused a flurry of conversation in response with a definite divide between those opposed to supporting immigration and those who are against it. The chain also included a number of colorful comments directed at Selbst herself, with one person suggesting that she needs to keep her agenda out of poker. Another said that it would be funny if an illegal immigrant eliminated her in the tournament.

Whether or not Selbst can keep up with the new, younger generation of poker players will be seen next month at the WSOP Main Event.