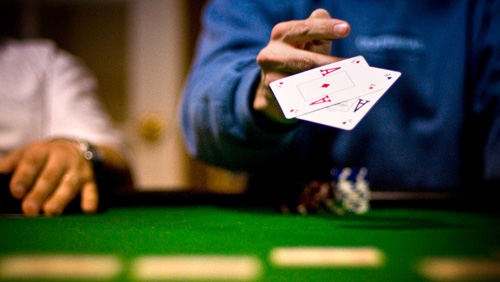 Three poker stories with a hint of PokerStars seasoning including a former employee having a baby, a current employee taking the TED stage, and two brothers making another weight loss prop bet.


Three news stories with a very loose PokerStars thread connecting them like those mittens that used to hang off your cardy at school, and we will begin with Vanessa Selbst.

The former PokerStars Team Pro (and former poker player), is having a baby.

Despite the poker lull recently, I feel like I’m gonna crush this one. #WSOAF pic.twitter.com/d7kYw3oLx6

In December, Selbst announced her intention to step away from the game to concentrate on a new career in the world of finance; now she has a new role as a parent. Selbst married Miranda Foster in 2013.

I opined on the lack of woman in the higher echelon of the poker world last week. In her pomp, Selbst was the one who had the right blend of skills and personality to sit at any table in the world. Her $11.8m and many titles are a testament to that fact. Selbst also remains the only woman to ever become the Global Poker Index (GPI #1).


One person you won’t be seeing taking a sabbatical from the game to have a baby is Liv Boeree.

The PokerStars Team Pro recently appeared at Tedx in Manchester in the UK, where she gave a talk about probabilities in a Number Speaks a Thousand Words.

Well, she has done it again.

The orator extraordinaire took to the TED stage in Vancouver during the weekend of the Age of Amazement.

Boeree joined the likes of Sapiens author Yuval Noah Harari, Netflix founder Reed Hastings, serial author Steven Pinker and one of her personal favourites Will MacAskill, the founder of the Effective Altruism movement.

“I have six minutes to talk about how poker improves general decision making.” Boeree posted on Twitter.


And there was another tweet on Boeree’s timeline that drew the attention of some folk this week.

“When we make a decision… we are making a bet against all future versions of ourselves that we are not choosing”
– love this quote from @AnnieDuke ‘s new book “thinking in bets”. If you enjoy reading about rationality, I highly recommend it.

Boeree’s relationship with Annie Duke stretches all the way back to her beginning in the game when she received coaching from the World Series of Poker (WSOP) bracelet winner during her role in a reality TV show.

I am not sure the show of support was Liv practising ‘general-decision making’ unless she is flameproof, or has the ability ignore the stream of comments that come running onto the cobweb like a spider ready to feast on a fat juicy bluebottle.

The first person to come out and give Boeree a Twitter twatting over her support of a woman a significant portion of the poker world seemingly despises was Scott Seiver.

“How are you going to promote this con woman and thief who defrauded people of millions of dollars, has shown no remorse, and has never suffered any consequences for her actions?”

“Because (in this order): a) the book is really good and I believe it is a net positive for the world if people read it and b) I have heard both sides of the story unlike almost everyone else which, with all due respect Scott, you haven’t.”

And that was her only reply to the 54 comments that then followed.

But then this is a woman who eats TED talks for a living.

Two people I am very confident aren’t having a baby are the Staples brothers.

PokerStars Team Online member, Jaime Staples and his brother Matt (that always sounds so wank), hit the news recently when they took $150,000 from Bill Perkins in their Ultimate Sweat Challenge.

The brothers had a year to get within a pound in weight of each other and weighed in at the exact weight. To book the win, Jaime had to lose a ton of weight, and his brother had to pile it on.

Once again the team will employ Mike Vacanti to help them reach their goal, and the personal trainer had this to say to the trolls.

1) Bet gets booked  2) Everyone talks shit and says it’s impossible  3) Trainer Mike makes youtube comment begging for action  4) None of shit talkers book any action  5) As the year goes on, the shit talkers stop leaving youtube comments  6) Team Staples wins the bet    …. where have I seen this before?