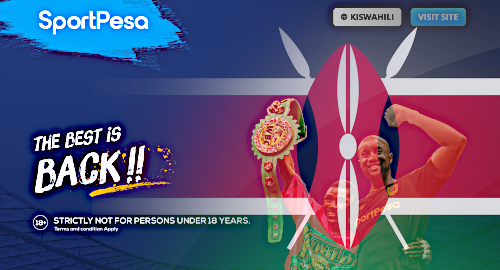 Sports betting operator SportPesa has officially resumed its Kenyan-facing operations – for real, this time – although how long it remains available remains to be seen.

On Tuesday, the ke.SportPesa.com domain and its associated iOS and Android apps finally began accepting wagers from Kenyan bettors, nearly one month after the first attempt to revive the SportPesa brand ran headlong into regulatory roadblocks.

SportPesa Kenya’s official Twitter feed has been busy advising new customers on how to open accounts, make deposits and place wagers, while instructing bettors who were SportPesa customers prior to the company’s 2019 market exit on how to reactivate their existing accounts.

SportPesa exited Kenya following a prolonged tax dispute with the Kenya Revenue Authority (KRA) that resulted in the suspension of its license by the Betting Control & Licensing Board (BCLB). SportPesa’s return came via a new BCLB licensee, Milestone Games Ltd, which is majority controlled by SportPesa CEO Ronald Karauri.

The BCLB blocked the SportPesa reboot the same day it appeared, based on the regulator’s view that the SportPesa brand, mobile paybill numbers and SMS short codes belonged to SportPesa’s Kenyan holding company Pevans East Africa. But a court ruling overturned the BCLB’s decision, at least until the ownership matter can be discussed further at a hearing on January 25.

As a result, BCLB chair Cyrus Maina issued a letter on Saturday (21) withdrawing the October 30 order prohibiting SportPesa/Milestone’s reboot, although it qualified the withdrawal as “a stay of execution.” SportPesa/Milestone waited a few days, presumably to make sure the letter wasn’t a trap, then began pumping out the good news to Kenyan bettors.

This weekend, the Standard reported that Pevans had attempted to reach a tax settlement with the KRA in September 2019. Pevans reportedly offered to repay its reported arrears of Ksh15.1b (US$137.4m) at a rate of Ksh838m per month for 18 months.

However, Pevans wanted the BCLB’s assurance that SportPesa could continue to operate in Kenya while the company was chipping away at its back-tax bill. That reassurance apparently wasn’t forthcoming, leading to SportPesa’s market exit in October 2019.

The tax dispute centered on differing opinions on what constituted betting winnings, on which the government imposed a 20% tax. The government said ‘winnings’ included the repayment of the punters’ original stake, which both operators and bettors viewed as a tax on betting turnover.

Some SportPesa rivals whose operations continued in the company’s absence were only allowed to carry on after agreeing to use the government’s definition of winnings. But the government itself has sent mixed signals on how it plans to address the tax going forward.

For what it’s worth, SportPesa Kenya’s Twitter feed responded Wednesday to a customer’s complaint regarding the tax, saying: “It’s 20% of your net winnings as per the law. We give to Caesar what’s his.”

INTERIOR MINISTRY WINS SOME, LOSES SOME

The Ministry proposed amending gambling legislation that would have allowed it to freeze online betting accounts that hadn’t shown any activity for three consecutive months. Account holders would then have to prove the source of their funds in order to request a withdrawal.

However, the Committee rejected the Ministry’s proposal, noting that it would infringe on the turf of the country’s Unclaimed Financial Assets Authority (UFAA).

The Ministry had greater success convincing the Committee to accept a proposal to double the minimum betting stake from its current Ksh50 to Ksh100 (US$0.91). The Ksh50 floor was included in the proposed Gaming Bill 2019 to deter Kenya’s poorest residents from placing wagers as low as Ksh5, but only some operators agreed to implement the policy while the bill was still pending.

The Committee saw the new Ksh100 minimum as a means “to promote responsible gaming” and included it in their recommendations to parliament. Both gamblers and operators could face fines of up to Ksh5m and prison terms of up to six years for violating this new rule.