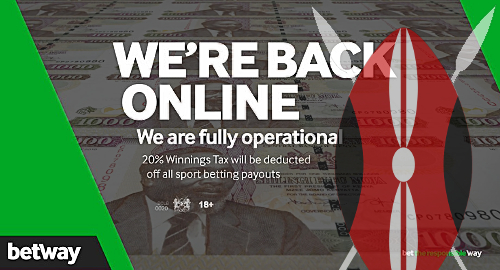 Online sports betting operator Betway has had its Kenyan gaming license reinstated as the government ponders a significant hike in minimum betting stakes.

On Wednesday, Betway announced that its Kenyan betting license had been reinstated by the Betting Control and Licensing Board (BCLB), clearing the way for the company to resume wagering activity in the country.

Betway was among the 27 betting operators whose licenses were suspended on July 1 due to what the government claims are hundreds of millions of dollars in unpaid taxes. The Kenya Revenue Authority declared on July 23 that 10 of the suspended licensees – including Betway – were in tax compliance, but that still wasn’t enough for the BCLB to clear Betway for takeoff.

Betway was only allowed to resume operations after agreeing to the government’s new interpretation of a 20% tax on punters’ winnings. Whereas the tax previously applied only to the actual winnings, the government now insists that the 20% be applied to the total sum returned to the bettor, meaning the tax is also applicable to the original betting stake.

Betway said this week that it would ensure that its new tax deduction is “clearly displayed on individual bet slips to ensure transparency and for ease of understanding by the punter.” Betway Kenya country manager Leon Kiptum thanked customers for “their patience and loyalty to our brand throughout this journey.”

Betway joins local operator Mozzart Bet as the only suspended operators to have had their licenses reinstated. Several other operators, including Betlion, Betika and Odibets, were unaffected by the license suspension and have continued to operate through the past two months of disruption. All of these operators chose to impose the KRA’s new 20% tax rule from the start.

Other operators, such as market leaders SportPesa and Betin, have refused to knuckle under, despite the suspension of their payment processing channels in mid-July. These operators have found support among some Kenyan legislators, although President Uhuru Kenyatta recently suggested that if legislators were to approve a measure to ban all gambling in Kenya, he’d have no problem signing it.

NEW BETTING STAKES MINIMUMS, AD CURBS PLANNED
Active Kenyan operators may soon find themselves with fresh limits on their business. The National Assembly Tourism and Sports Committee has been traveling the country conducting public hearings on the new Gaming Bill 2019, which includes a proposal to impose a new minimum online betting stake of Ksh50 (US50¢).

However, Capital FM quoted Committee chair Victor Munyaka saying the majority of Kenyans were telling his group to hike this minimum to Ksh500. Recently installed BCLB director Peter Mbugi supported this hike, saying the government wanted to make it “difficult for people to participate” in betting, “especially school-going children.”

Mbugi also said the government hadn’t given up its plan to impose tough new restrictions on gambling advertising, despite earlier plans being struck down by the Nairobi High Court in May. Mbugi said the government was now proposing that TV and radio stations pay a 35% tax on all gambling ads, while also prohibiting broadcasters from owning gambling businesses. Broadcasters caught flouting the new rules would face fines of up to Ksh20m plus up to five years in jail.