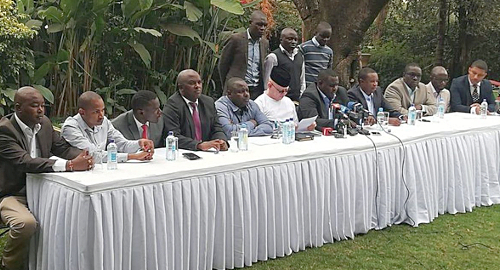 Kenya’s beleaguered sports betting operators got some support Tuesday from a group of legislators angered by their government’s continued attacks on the betting sector.

On Tuesday, a group of 12 members of the National Assembly and Senate issued a joint statement (video viewable below) calling on the government to reinstate the gaming licenses of the betting operators that were suspended on July 1. The government followed that up by suspending the companies’ payment processing channels, leaving the companies with no way to conduct business.

The government maintains that the betting operators, who include market leaders SportPesa and Betin, owe the government hundreds of millions of dollars in unpaid taxes. The operators have rejected these claims and have gone to court in a bid to reinstate their licenses and online Paybill numbers.

Speaking for the group of legislators, Senator Cleophas Malala urged the government “to look at the interest of the economy and other stakeholders and allow the said companies to operate pending the completion of the investigations.” Malala claimed the government was currently losing Ksh1b (US$9.7m) per month due to the suspended operators’ sitting idle.

MP Babu Owino suggested he would lead fans of football clubs Gor Mahia and AFC Leopards – whose sponsorship deals with SportPesa were scrapped earlier this month – in “peaceful demonstrations” to protest the government’s actions. MP Samuel Atandi echoed this concern, saying the teams shouldn’t be allowed “to die because of someone who is mismanaging the sector.”

Atandi also questioned how SportPesa could have earned tax compliance awards from the Kenya Revenue Authority (KRA) for three years running if it was such a scofflaw. Atandi said the dispute boiled down to “the taxation on winnings,” and the two sides’ varying definition of what constitutes winnings.

The KRA insists that the gaming law approved in 2018 redefined the 20% tax on punters’ winnings to include not only the sum won but the stake wagered and returned to customers along with their winnings. Senator Malala took issue with this stance, saying this represents a taxation of capital, not income, and is therefore a violation of existing law.

The Association of Gaming Operators Kenya (AGOK) placed full-page ads in Tuesday’s newspapers trying to explain the government’s math when it came to the ‘winnings’ definition. While AGOK said it supported the government, the ad stated that “the methodology and interpretation of the term ‘winnings’ gives [betting] operators a bad image, especially with their customers who do not understand that the contentious interpretation is from the government.”

Atandi said the Parliamentary Finance Committee would study the taxation language to more accurately define the definition of winnings and hopefully come away with something everyone can agree on.