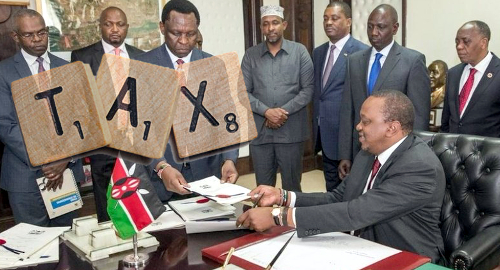 Kenya’s betting operators are popping the champagne corks after the government approved a significant reduction in their recently hiked betting taxes.

On Friday, Kenyan President Uhuru Kenyatta announced that he’d affixed his signature to the Finance Bill 2018 following its passage in what local media described as a “chaotic” session of Parliament on Thursday.

The Finance Bill makes a number of significant changes to the nation’s governance, but for our purposes, the primary item is the reduction of betting operators’ tax rate from 35% of gross gambling revenue to 15%, while imposing a new 20% tax on bettors’ winnings.

The government claims the new split tax regime will still generate SH30b (US$297m) per year for the government’s coffers but opposition MPs spent a good portion of Thursday’s session hurling insults at National Assembly Majority Leader Aden Duale, one of the prime movers in pushing for the gambling tax reduction.

That said, there are new indirect taxes that will likely impact Kenya-licensed online betting operators, including a 15% tax on internet and data services and a 20% tax on fees that banks charge for money transfers.

Kenyan legislators controversially approved hiking all gambling taxes to a new uniform 35% rate last summer, which in betting operators’ case, represented a nearly five-fold increase. Some gaming companies shut their local operations after the tax kicked in on January 1, saying their business was no longer economically viable, given that they already paid 30% corporate income tax.

Recent months saw several legislative efforts to reduce this 35% rate for betting operators, but these were rejected by legislators. Monday saw Kenyatta decline to sign the Finance Bill as written, explaining in a memo to parliament that he wished to see the 15% betting tax in a future draft.

The tax on punters’ winnings isn’t technically new, as the plan was originally approved in 2016 only to be junked prior to implementation due to technical issues regarding collection of these payments.

In what can hardly be described as a coincidence, Thursday saw local gaming operator SportPesa announce that it will make an advance payment on sponsorship money to local football club Gor Mahia. The club has been unable to pay its players and coaches, in part due to government delays in distributing sport’s share of the new gambling tax revenue.

The Nairobi News quoted SportPesa CEO Ronald Karauri saying his firm would advance the club sponsorship moneys that were due at the end of the month “to take care of whatever issues they have for now.”

SportPesa scrapped all its local sports sponsorships following January’s imposition of the 35% tax rate, although it renewed some of these deals in April – including with Gor Mahia – albeit at a reduced level of financial commitment.