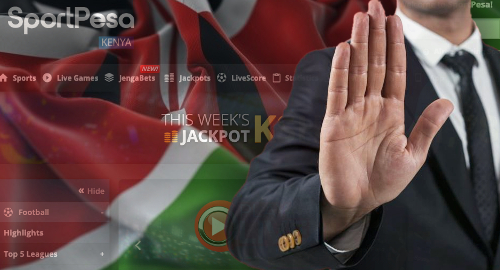 Kenya’s gambling operators are pushing back against the government’s heavy-handed tactics, even as the country’s president told them not to challenge the actions in court.

On Monday, Kenya’s market-leading sports betting operator SportPesa took out a full-page ad in local newspapers touting the taxes it paid last year, as well as the significant contributions the company made to local sports and community groups.

SportPesa said it generated revenue of Ksh20b (US$194m) in 2018, from which it derived gross profit of Ksh9b and paid Ksh6.4b in tax. That’s Ksh2.4b more than a government report claimed was paid by Kenya’s entire betting sector last year.

SportPesa also said it paid Ksh1.37b in 2018 to support local sports teams and a further Ksh171m for social programs. It’s worth noting that the Kenya Revenue Authority has honored SportPesa with a tax compliance award for the past three years running.

Earlier this month, the Betting Control and Licensing Board (BCLB) either revoked or temporarily suspended the licenses of several dozen gambling licensees based on the government’s claim that the companies either owed the government billions of shillings in taxes or had failed to live up to other licensing requirements.

Some of the affected companies challenged the tax claims in court and received temporary stays of the license suspensions, but the government upped the ante last week by ordering local telecom operators to cancel the betting companies’ pay bill numbers and SMS codes, while giving gamblers until last Friday at midnight to withdraw their account balances.

On Sunday, the Daily Nation quoted a SportPesa source saying that the company could begin laying off as many as 600 staff this week unless the impasse is resolved. On Monday, the Citizen reported that another suspended licensee, betPawa, had filed an emergency legal action to reinstate its payment processing capacity until its license dispute with the BCLB is resolved.

The government appears utterly disinterested in any form of negotiation that isn’t accompanied by a hefty tax check. On Saturday, Kenyan President Uhuru Kenyatta accused betting operators of “hoarding taxes” and said the government will continue to “push them to pay.” Kenyatta said the affected firms “should stop threats that they will move to court,” adding that the government “must get its rightful share” of gambling proceeds to fund social programs.

That same day, Interior Secretary Fred Matiang’i gave an address to regional police officials in which he urged them to arrest the owners of betting firms if they couldn’t produce an up to date BCLB license.

Not all Kenyan legislators support the government’s crackdown. On Sunday, MP Paul Ongili claimed Matiang’i was “clearly overstepping his mandate” and urged local authorities to “investigate this clear and blatant abuse of office.”

Ongili went on to accuse Matiang’i of launching “a personal war targeting certain businesses for his own selfish personal gain.” Ongili claimed the BCLB had failed to target betting operators “in which [Matiangi’i] has an interest,” adding that the secretary’s goal was to “drive Sportpesa and Betin out of business leaving the industry to recent entrants BetLion where he is represented by his associate Lee Nyachae.”