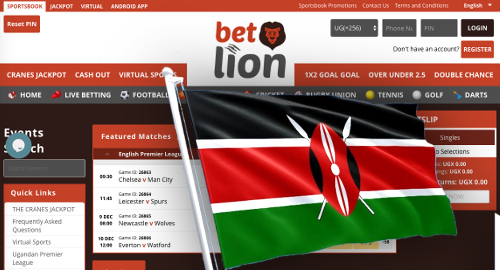 On Friday, Business Daily reported that BetLion had sought a betting license from Kenya’s Betting Control & Licensing Board (BCLB). The report quoted a BCLB source saying that the regulator had okayed BetLion’s application and that the site could launch its local operations before the year was through.

The Standard quoted BetLion’s chief commercial officer Spencer Okach, who acknowledged that the company was “going from strength to strength.” But Okach played coy regarding BetLion’s Kenyan intentions, saying only that “obviously [the market] is on BetLion’s radar.”

BetLion, which announced its own birth last year, is powered by sportsbook technology supplier FSB Tech. BetLion’s launch marked the return of betting industry notable Chandler after he sold his BetVictor operation to horseracing luminary Michael Tabor in 2014.

BetLion launched in Uganda last year and quickly made a name for itself by inking a major sponsorship deal with the Federation of Uganda Football Associations (FUFA) and its national team, the Uganda Cranes. BetLion reportedly has plans to establish roots in at least eight African markets, including Zambia.

BetLion’s interest in the Kenyan market was likely spurred by the government’s decision in September to roll back the gambling revenue tax rate from 35% to 15%. The market had been in flux since January, when the government imposed the new 35% rate after previously charging betting operators a mere 7.5%.

Kenya is one of Africa’s more mature gambling markets, and BetLion will have its work cut out competing with established operators such as SportPesa, Betway and Betin. BetLion is already facing off against those same operators in Uganda and is reportedly holding its own, so onward and upward.