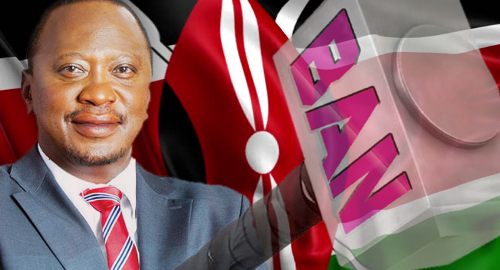 On Saturday, Kenyan President Uhuru Kenyatta told a church gathering that “we have this thing called gambling in the country and it is terrible. I alone cannot change this trend.” Kenyatta then urged two legislators in the audience to “go back to the constitution and change the laws,” vowing to approve these changes if presented to him.

However, until such legislation is presented to him, Kenyatta (pictured) affirmed that his government would continue to squeeze the gambling sector for every penny the government feels its owed. Using the Biblical reference to ‘render unto Caesar,’ Kenyatta said “as long as people continue to gamble, Caesar must get his share.”

Kenyatta also pushed back against market-leading betting operator SportPesa, which recently scrapped its sponsorships of Kenyan football as a cost-cutting measure while its local betting operations remain suspended. Kenyatta said there was “no reason for a few individuals to benefit from gaming companies who are claiming to sponsor athletes and sportsmen.”

SportPesa was among the 27 betting operators whose licenses were suspended on July 1, based on the government’s claim that they collectively owe hundreds of millions of dollars in unpaid taxes, a claim hotly disputed by the operators. These operators also had their digital payment channels cut off, effectively leaving them unable to conduct further operations in Kenya. Only one of these suspended licensees, Mozzart Bet, has seen its license restored since the brouhaha erupted.

Last week, a group of Kenyan legislators publicly urged the government to relent in its campaign against the betting industry, saying the ongoing halt in their operations was hurting not only Kenyan football but the overall economy. These statements were subsequently slammed by members of Nairobi’s county government, who told the legislators to “stop meddling with county duties” and stick to national affairs.

Interior Cabinet Secretary Fred Matiang’i, who has led the charge against betting operators, appears to believe that operators have in the past unduly benefited from having close relationships with members of the Betting Control and Licensing Board (BCLB). Local media reported that Matiang’i recently sacked nearly half of the BCLB staff, including acting director Liti Wambua, whose shoes have been filled by Peter Mbugi, deputy commissioner of Kisii county.