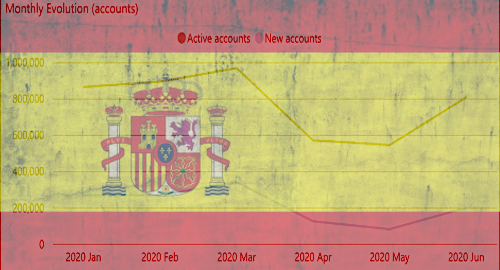 The traditionally dominant sports betting vertical earned €68.1m in Q1, down 20.8% year-on-year and off 38.4% sequentially. Both pre-match (-49%) and in-play betting (-39.6%) suffered significant year-on-year turnover declines, while the pandemic halt to most major league play produced a 266.5% rise in ‘other’ bets, the only category to post a year-on-year increase.

Betting’s loss was online casino’s gain, as that vertical’s revenue shot up nearly 45% to €93.5m. Interestingly, while other markets have expressed great fear over pandemic surges in online slots play, Spain’s slots revenue rose slower than the overall category (€51.9m, +30.4%).

Sports betting turnover bottomed out in April and then rose steadily thereafter, while casino spending peaked in May before declining slightly in June. Poker peaked in April and had slid back to its pre-pandemic levels by June.

Q2’s revenue gains were achieved despite significant declines in both active accounts (-25.3%) and new account registrations (-41%). Both categories bottomed out in May, with active accounts in particular enjoying an upward surge in June.

Sponsorship was the only marketing activity that posted a year-on-year spending rise in Q2, up 16.2% to €4.3m. Advertising (-57.6%), bonus offers (-57.3%) and affiliate marketing (-23.4%) all started to decline in March but advertising and bonuses headed sharply north in June.

Sponsorship will likely record a massive surge when Q3’s numbers are released, following the frenzy of new deals signed in recent months as Spain’s government forges ahead with its plans to severely limit online gambling marketing (despite the country’s problem gambling rates remaining among the lowest in Europe).