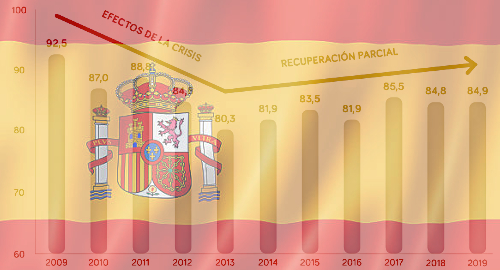 Thursday saw the release of Gambling & Society 2020, the annual market study by CEJUEGO, which represents Spain’s private gambling operators, with the able assistance of the University Carlos III of Madrid. The report says 30m Spaniards, roughly 85% of the population aged 18-75, engaged in some form of gambling last year, a figure that has remained relatively constant since 2015.

Lottery products offered by the state-run SELAE and ONCE, are the most popular form of gambling, with the annual Christmas draw lottery enjoying 74.5% participation. Around 3.5m Spaniards enjoyed ONCE’s scratch cards, up from 3m in the 2019 report, and this product also has the largest share of players under 35 years (50.5).

Retail sports betting was also on the decline, with the number of Spaniards who visited a betting shop falling 0.5 points to 3.7% (1.3m).

The report derives its online gambling info from Spain’s DGOJ gambling regulatory body, and its figures for 2019 are incomplete. But CEJUEGO estimated that there were around 1.5m online gamblers, roughly unchanged from 2018, while the number of active monthly online accounts equates to 1.7% of the population, just 0.1 points higher than in 2018. Online gambling revenue came in just under €800m last year, representing 7.7% of the overall market.

Among the more significant findings was the fact that just 0.3% of Spain’s gamblers are deemed to be problem gamblers (although, given the international comparisons cited, CEJUEGO’s definition appears to refer to the more severe category of pathological gamblers). Regardless, it ties Spain with Sweden for the lowest rate in Europe.

The 2019 stats obviously predate the COVID-19 pandemic, which was the catalyst for the strict new online gambling marketing restrictions proposed by Alberto Garzón, Spain’s Minister for Consumer Affairs. These restrictions encompass everything from television and radio ads to sports sponsorships and deposit bonuses.

Since Garzón’s announcement, betting operators have been frantically snapping up new sponsorship deals, prompting a frustrated Garzón to warn that the government would grandfather existing deals, but only for “a short period and not two years or three as some clubs will like.”

The new rules were supposed to take effect in October. On September 22, Garzón told the Senate that the new rules would take effect “in a few weeks” and would spell an end for “the law of the jungle.” Garzón also noted that his campaign against the gambling sector “does not end by prohibiting advertising,” and that other curbs were in the works.

Garzón has repeatedly stressed the alleged devastation that online gambling was inflicting on Spanish society, particularly its youth but, as the new CEJUEGO report illustrates, this is a solution in search of a problem.