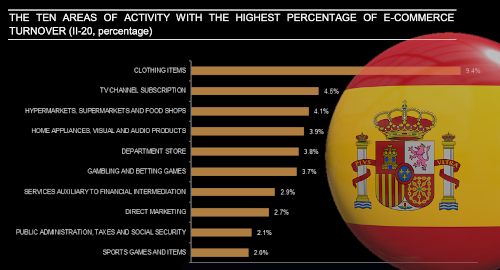 Spain’s gambling and betting operators claimed a smaller share of the country’s e-commerce activity in the second quarter of 2020, casting further doubt on the government’s rationale for imposing tough new marketing limits.

Gambling and betting accounted for 3.7% of all e-com transactions in Q2, ranking sixth among business sectors. Gambling’s score was unchanged from the same period last year but down from 4.1% in Q1 2020.

In terms of the number of individual transactions, gambling and betting ranked fifth with 5% in Q2 2020, down from second place and 5.9% in Q2 2019. The transaction count is down even further from Q1 2020, during which gambling outpaced all other sectors with 6.4% of all online transactions.

Critics will point out that online gambling’s e-com share decline is at least partly due to surges in other sectors, including clothing sales and TV subscriptions, a charge for which there’s likely some truth.

But Spain’s government justified its draconian new marketing rules based on the idea that online gamblers were out of control during their pandemic lockdown, an already dubious claim that seems even less true now.

Spain’s Q2 online gambling revenue enjoyed a double-digit year-on-year rise but fell 4.2% sequentially, primarily due to the pandemic-related halt of major sports events during the period. Online casino and poker did post significant year-on-year gains in Q2, but both of those verticals posted sequential declines in Q3 following sport’s return.

LOWER-TIER SPORTS TO GET BETTING TAX KICKBACK
Speaking of sport, the new head of Spain’s Dirección General de Ordenación del Juego (DGOJ) regulatory body says the government will divert some of the taxes raised from online sports and race betting to local sports and racing bodies as part of its update of the 2011 gaming law.

Mikel Arana told local media that this change will be enshrined in the new Royal Decree on gambling that is expected to be finalized sometime in H2. However, Arana clarified that these tax kickbacks wouldn’t go to top-tier sports divisions, but to “lower categories that do not have major sponsorships.”

GARZÓN LETS HIS GUARD DOWN FOR ONCE
Meanwhile, Consumer Affairs minister Alberto Garzón gave an interview last week that saw him live up (or down) to his reputation as a fierce protector of state-run gambling. Garzón justified his unwillingness to impose similar restrictions on the SELAE and ONCE state lotteries because “bingo or gambling is not the same as the Christmas Lottery.”

However, Garzón then managed to insert both feet into his mouth by claiming the problem gambling “occurs when, at the time of purchase, you know if you have won or lost. When the award is deferred, the psychological mechanisms are not so dangerous.”

Garzón was apparently unaware that he is describing the exact mechanism behind the instant-win scratch cards offered by ONCE. Or perhaps he’s just so conditioned to stretching the truth to benefit the government’s gambling revenue that he no longer sees the point behind engaging in further subterfuge.