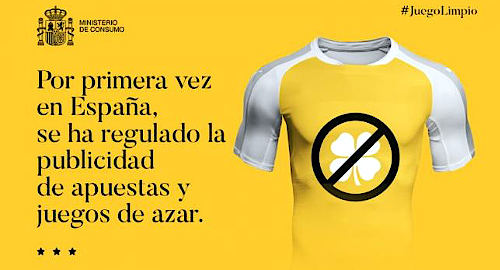 Spain has made good on its threat to prohibit most forms of online gambling marketing, a move that critics say will fail to achieve the government’s goal of protecting consumers.

On Tuesday, Spain’s Council of Ministers approved the Royal Decree on gambling advertising, which will restrict commercials on television/radio/YouTube to a narrow window of 1am-5am, eliminate gambling sponsorship of sports bodies and limit operators offering bonuses only to customers who have already made at least three deposits.

The new rules will take effect on a staggered basis, with existing football sponsorship deals recently grandfathered through the end of the current season. Existing marketing campaigns featuring athletes or other ‘famous’ figures will be allowed to extend until April 1, 2021, after which celebrity endorsements will no longer be permitted.

Similarly, existing online advertising contracts with third-party portals will be allowed to continue through May 1, 2021. After that, operators will only be allowed to promote via their own gambling sites, although promos can still be pushed out to operators’ social media followers provided those platforms employ age-related filters.

Operators who fail to abide by the new rules could face financial penalties starting at €100k and ranging up to €1m, along with possible suspension of their license for up to six months.

Minister for Consumer Affairs Alberto Garzón, who previously claimed that the new rules spell an end for the “law of the jungle,” took questions from the media following the Council’s announcement. Garzón repeated claims that the new rules were required due to recent increases in gambling marketing and these ads “had more capacity to attract” during the pandemic lockdown.

Advertising spending did indeed rise in 2019 but plummeted during the second quarter of 2020, the very period in which Garzón claims marketing became inescapable. Moreover, 2019’s biggest spenders remain the state-run SELAE and ONCE lotteries, which have been protected from the worst of the new marketing rules.

Garzón said Tuesday that it “would not make sense” to impose the same marketing restrictions on the state lotteries “because they are of a different nature” to online casino and betting operators. Garzón said it was the country’s gambling laws, not the Decree, that made this lottery-friendly distinction.

Garzón admitted that there is yet any hard data showing that Spain’s problem gambling rates underwent a significant spike during the pandemic lockdown, but he continued to claim there was “more attractiveness to participate” in online gambling thanks in part due to advertising.

Jdigital, the Spanish online gambling industry association, continues to predict that Garzón’s pet project will fail to protect consumers because it will push consumers into the arms of gambling sites not holding a Spanish license, who are likely working on Spanish-language welcome bonus offers as we speak, safe in the knowledge that they are outside Garzón’s power to punish.