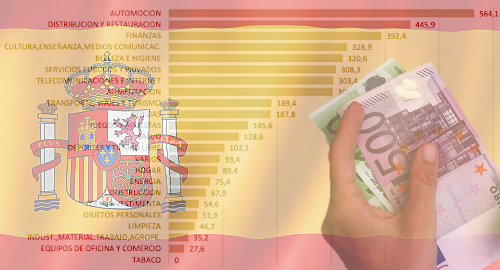 Spain’s gambling operators boosted their advertising spending over 10% in 2019 but it was the state-owned lotteries who spent like drunken sailors.

On Wednesday, the Spanish Association of Advertisers (AEA) released its Advertising Observatory in Spain 2020 report, which ranked gambling and betting 11th among the list of top-spending industry sectors with a combined outlay of €145.6m in 2019.

That sum represented a 10.6% increase from 2018’s ad buys, even as the overall market’s ad spending fell 0.6% year-on-year. Gaming was one of only two sectors to post a noticeable increase in spending last year (the other being ‘industrial, material and agricultural,’ which spent 29.3% more).

In terms of ‘notoriety,’ defined by the AEA as “the number of people who remember having seen or heard advertising for a brand,’ gaming ranked 15th, just behind ‘home’ and just ahead of ‘personal items.’

For the first time, digital media overtook Spanish television to claim the largest share (38.6%) of 2019’s ad spending, while TV settled for second place with 33.7% and radio and newspapers tied at 8.2%.

The Decree will strictly limit operators’ ability to promote their products, be it on TV, radio, outdoor signage or the jerseys of sports teams. The AEA report shows sports sponsorship spending was worth €405m last year, up 9.8% from 2018, and sponsorships crushed the ‘notoriety’ index, proving their value to the lucky few who can nab such deals.

Spain’s new advertising rules won’t apply to the two state-run lotteries, SELAE and ONCE, despite the AEA stats showing that ONCE spent €49m all by itself promoting its products last year. Could be why ONCE’s sales were up 4.4% to €2.25b last year.

Meanwhile, SELAE – which has been just as active as its private rivals in signing up new sports sponsorships over the past month or so – just announced a new deal with the Spanish Radio & Television Corporation to sponsor highlight packages of matches involving Spain’s top two football divisions. That deafening silence you hear is Garzón saying absolutely nothing.