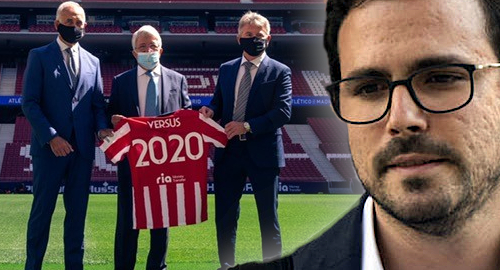 Spain will grandfather existing online gambling sports sponsorships after imposing its proposed ban in October, although the government isn’t yet sure how long a grace period will be permitted.

On Friday, Spanish media quoted Consumer Affairs minister Alberto Garzón saying there would be a “short transition period” for the country’s sports clubs to rid themselves of their online gambling sponsors after the Royal Decree on gambling advertising takes effect in October.

Garzón (pictured right) has been made to look foolish over the past couple weeks as a flurry of new sponsorship deals between online bookmakers and Spanish football teams was announced. Garzón has accused betting operators of “huge recklessness” for mounting “an absurd challenge” to the government’s stated aims.

Garzón said Friday that the Royal Decree on gambling marketing would be approved by the Council of Ministers “in a few weeks,” after which “no one will be able to re-sign any sponsorship contract.” Garzón warned that gambling operators would need to “correct” their attitude “because the law is the law.”

However, Garzón noted that “as is done in all laws,” there will be a transition period “to allow those contracts to expire.” Garzón said the government was “right now studying all legal issues” to determine what length of transition period was permissible, but he warned that it “will be a short period and not two years or three as some clubs will like.”

Garzón also found time to defend the Decree’s blatant favoritism toward the state-run SELAE and ONCE lotteries, which will be able to continue marketing their wares to Spanish customers with only slight modifications. Garzón claimed the Decree was “not about killing flies with cannon shots,” while arguing without evidence that lotteries were a “reserved” form of gambling that didn’t cause similar harm to society as online betting and casino products.