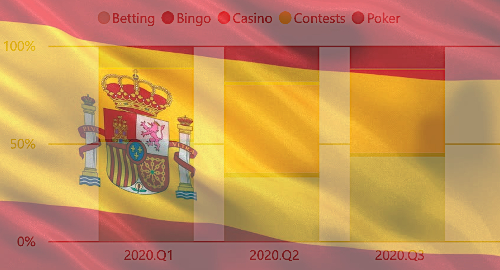 Spain’s online gambling market took a step backward in the third quarter, as sports betting was the only vertical to post a sequential gain.

Sports betting reclaimed the revenue crown with €85.2m, down 15.4% year-on-year but up by one-quarter from Q2 2020. Pre-match betting took the biggest year-on-year hit, with revenue falling 21.4% to €31.5m while live betting was down 9% to €52.6m. Both segments posted sequential gains of nearly one-third apiece.

Spain’s licensed gambling operators dramatically boosted their marketing spending to just over €150m in Q3, with advertising tripling sequentially to €51.8m while bonus offers shot up 560% to €82.4m. Affiliate marketing rose 40.6% to €9.4m and sponsorship spending gained 51% to €6.5m.

Those figures will dip dramatically in quarters to come as Spain’s new online marketing restrictions take effect, although the last-minute flurry of new sponsorship deals operators signed just under the wire will temporarily boost that column. Under the new rules, all existing marketing contracts will expire come the spring, with six- to seven-figure fines for marketing violators, who could also face license suspensions of up to six months.

Further upheaval is likely, as the DGOJ announced this month a new consultation on ‘safer environments for online gaming.’ Worryingly, a number of Spain’s opposition parties announced an agreement on Monday to push the government to boost online gambling tax rates.

The DGOJ is itself facing an uncertain future after the government approved a budget earlier this month that includes a new Ministry of Consumption and Gambling, apparently looking to give Consumer Affairs Minister Alberto Garzón – who largely drove the marketing crackdown – even greater authority to monitor gambling operations.