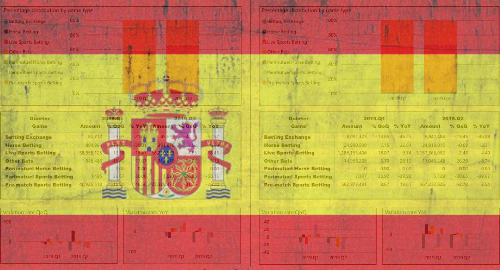 Spain’s online gambling market suffered a revenue setback in the second quarter of 2019, as fixed-odds sports betting fell in the absence of World Cup excitement.

Sports betting was the culprit behind the sequential decline, as the vertical’s revenue of €86.5m was down 1.3% year-on-year and down 15% from Q1 2019. Traditional fixed-odds wagering fell 31.2% sequentially while in-play betting (which accounts for the bulk of wagering) fell a less alarming 4.5%. The year-on-year figures showed a slightly different dynamic, with pre-match betting revenue falling 26.2% while in-play was up 18.5%.

Betting turnover fell 2.8% from Q1 but saw a 3.2% year-on-year boost, suggesting Spanish-licensed sportsbooks played unlucky in their dealings with customers.

The online casino segment tried to compensate for betting’s decline by posting revenue of €69m, up 22.2% year-on-year and 4% better than in Q1. As usual, slots claimed the biggest slice of the casino pie, rising 31.9% to €40.3m. Casino claimed a 38.7% slice of Q2’s overall revenue, a new high-water mark for the vertical.

Despite the introduction of shared liquidity with France and Portugal, the poker vertical continues to struggle, posting revenue of €19.4m, reflecting negative growth in both year-on-year (-0.5%) and sequential (-8.5%) terms. Poker cash game revenue slipped 1.6% sequentially while tournament revenue tumbled 12.3%.

As for the lesser verticals, bingo revenue slid 7.7% year-on-year to €3m and the contest segment continued its march toward irrelevance, falling by one-half to just €470k, equal to only one-quarter of one percent of the market’s total quarterly revenue.

The year-on-year declines were reflected in the number of new account signups, which were down 12%, although the number of active accounts was essentially flat. Spanish operators decreased their marketing spending by 10.3% from Q1, with most of the decline coming from sponsorships (-24.3%) and advertising (-14.6%), although the sponsorship figure was up 8.9% year-on-year.

That advertising figure may continue to plummet, as Spain’s government is currently mulling whether to impose draconian new limits on gambling advertising, although the government has yet to indicate whether it will accept such recommendations from the country’s ombudsman. This uncertainty likely contributed to the Kindred Group’s recent decision to withdraw its Spanish online license application, although other operators such as Betfred continue to pursue Spanish accreditation.

Much of the criticism of the proposed gambling advertising limits have focused on the carveouts that would be granted to the state-run Selae and Once lotteries, which haven’t exactly shone when it comes to responsible gambling controls, particularly those involving underage customers.

In June, a Madrid court ordered Selae to halt its online lottery sales within 90 days. However, this order was issued largely to protect land-based lottery sellers, not due to responsible gambling concerns over online sales. Digital channels have become an increasingly important aspect of Selae’s overall turnover, posting annual double-digit increases.