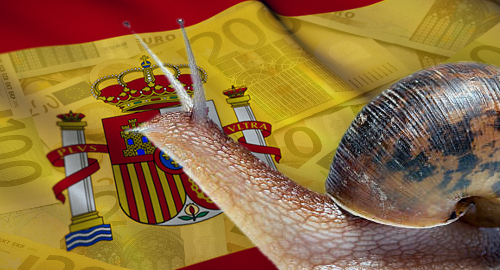 Spain’s online gambling market rose by more than one-fifth in the first quarter of 2019, despite the poker vertical’s decline.

Sequential growth in Spain’s regulated online market has been slowing over the past year, and the Q1 growth marks the lowest percentage gain since the 2.3% rise recorded in Q2 2018. However, that quarter featured the first half of the 2018 FIFA World Cup, a tailwind that Q1 2019 lacked, so congratulations may be more appropriate than hand-wringing.

The online casino vertical saw its revenue rise by one-fifth to €67.1m, thanks primarily to slots revenue spiking 29.2% to €37.5m. While its share of the overall casino pie remains tiny at just under €3m, baccarat posted the most dramatic percentage gain, shooting up nearly 1,400% year-on-year, despite turnover rising a comparatively puny 31.3%.

Online poker revenue came in at €21.2m, down 1.4% year-on-year although up 2.7% from Q4. Cash games were responsible for the overall slide, falling 5.7% to just under €7.5m, while tournaments improved 5% to €13.7m. Cash game spending was down 1.6% year-on-year and 10.4% sequentially, despite the liquidity-sharing pact Spain enjoys with France and Portugal.

Spanish-licensed operators spent a combined €92.2m on marketing efforts in Q1, a 21.4% year-on-year rise. Advertising was up 16.1% to €47.8m, although this was down 6.5% from Q4, likely reflecting operators’ unease with the government’s threats to impose tobacco-like restrictions on gambling ads. Affiliate marketing spend shot up 62.4% to €10.2m while bonus offers rose 14.9% to €29.3m. The number of active online accounts grew 13.1% to over 909k.