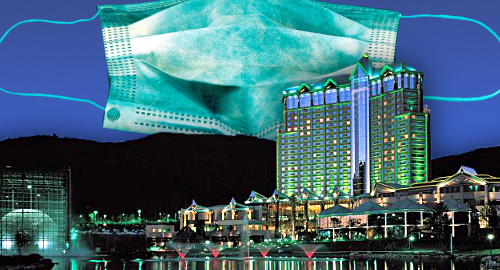 South Korea’s casino operators are extending their prolonged COVID-19 closures as the country struggles to bring its infection rate under control.

Last Friday, Kangwon Land, the only South Korean casino that allows local residents onto its gaming floor, announced that its plan to reopen to the public on Monday (7) wasn’t going to happen. Instead, the casino extended its closure until 6am on Monday, September 21.

Kangwon Land (pictured) originally shut in late-February but reopened some VIP gambling facilities in May. However, plans to reopen its mass market gaming floor came to naught and the company was forced to shut all operations in mid-August for the second time.

In early May, Kangwon Land said the shutdown had already resulted in lost revenue equal to nearly one-fifth of its 2019 total. The company’s Q2 earnings report showed revenue falling 91.4% year-on-year, while the H1 bottom line showed a net loss of KRW201.6b (US$169.9m) versus a KRW153.4b profit in H1 2019. On Friday, the company said the latest shutdown would deprive it of a further KRW36.4b in lost revenue.

Paradise Co Ltd, which operates four foreigner-only casinos in South Korea, was forced to close its flagship Paradise City integrated resort last week due to a positive COVID-19 case among its restaurant staff. The company shut down for what was supposed to be a few days of disinfecting but the reopening was later delayed until this Monday.

Instead, Paradise announced Friday that Paradise City’s non-gaming operations would reopen on Wednesday (9) at 1pm while its gaming floor would remain closed “indefinitely” in order to guarantee the safety of both customers and staff. Local media reported that the number of infected staff had risen to six as of Friday, including two personnel involved in gaming operations.

Until this latest hiccup, Paradise appeared to be weathering the pandemic better than some of its rivals. The company reported Monday that its August casino revenue totaled KRW17.3b, down 75% year-on-year but essentially flat from July 2020’s figure. For the year-to-date, revenue is down 51.4% year-on-year to KRW240.4b.

On Monday, South Korea reported 119 more cases, extending a streak of daily triple-digit gains since August 14, although the figure has failed to top 200 for five consecutive days. The capital Seoul imposed new restrictions on Monday, including banning eating and drinking at food trucks and street stalls, as well as ordering bakeries and ice cream shops to close.