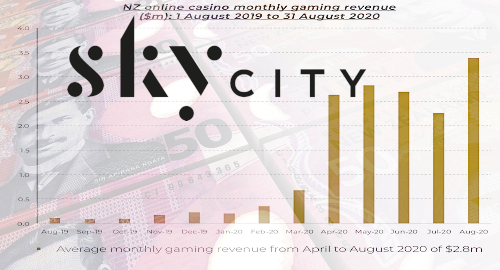 The gains came despite a tumultuous fiscal year that saw a major fire at its unfinished New Zealand International Convention Center (NZICC) in Auckland, as well as the shutdown of its three NZ casinos and its casino in Adelaide, Australia in March due to COVID-19.

The normalized stats discount proceeds from the sale of the long-term concession of SkyCity Auckland’s car park, but also include a non-cash AU$150m impairment of its Adelaide casino license due to ongoing construction issues and a “revised timeframe to achieve long-term potential earnings post expansion.”

All four SkyCity casinos were in negative revenue territory in FY20, with Auckland and Adelaide both down over 18% – excluding VIP gambling operations aka ‘International Business’ (IB) – while earnings were down double-digits everywhere except the Hamilton property.

The Gaming Innovation Group-powered platform reported over 35k customer registrations by the end of August – 15k of those came in the three months ending August 31 – and was earnings positive every month from April.

The NZ casinos reopened on a partial basis in May before fully reopening in June, although the Auckland property was forced to shut temporarily again last month due to a pandemic resurgence. SkyCity noted that its online casino suffered a “slight reduction” in revenue once its local casinos reopened but this ticked back up when the Auckland venue shut a second time.

In July, SkyCity was warned against actively promoting its SkyCityCasino.com to Kiwi punters, given that the government has yet to authorize such activity on its shores. While the site remains a minnow in terms of SkyCity’s overall revenue, the company says one of its FY21 goals is to “progress online casino opportunity in NZ,” as the site offers “significant online and omni-channel opportunity.”

SkyCity CEO Graeme Stephens said the future was hard to predict given the medical uncertainty, but he was encouraged by the fact that domestic businesses in both NZ and Australia had recovered “more quickly than anticipated post-reopening.”

Stephens said FY21’s earnings should top this year’s but will likely come in well below pre-pandemic levels. Stephens said the company was expecting “negligible” IB activity until the borders reopen, which will also put a cap on non-gaming (hotel, restaurant, etc.) revenue.

SkyCity’s payroll got noticeably leaner during the lockdown and the company raised additional capital via a share placement in June, which the company hopes will see it through any future disruptions.

Meanwhile, SkyCity has been forced to deny using pandemic contact tracing to boost enrollment in its Premier Rewards loyalty club. During its post-COVID reopening, the company restricted entry to Premier members, in part due to capacity limits but also to ensure they knew how to reach guests if anyone subsequently tested positive.

This week, local media quoted an Auckland resident who said he was denied entry if he refused to sign up for the rewards program. The unidentified man said he’d offered to scan a QR code on a poster promoting the government’s NZ COVID Tracer app but was told by SkyCity staff that wasn’t enough to gain entry to the casino. The man concluded that SkyCity was “using contact tracing as an excuse to grow their membership database.”

A SkyCity spokesperson said the registration process was “not about driving membership,” citing the restrictions that were re-imposed when the Auckland property was allowed to reopen on Monday.