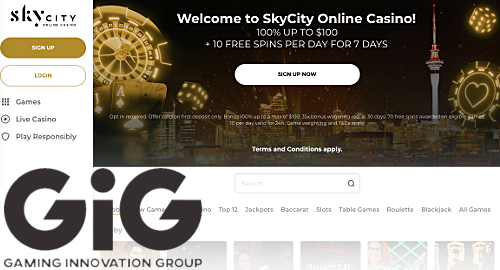 On Thursday’s SkyCity subsidiary SkyCity Malta announced the launch of its SkyCityCasino.com site, which is powered by MT SecureTrade Ltd, an offshoot of Gaming Innovation Group (GIG).

The site features a mix of live (courtesy of Evolution Gaming) and RNG casino games, as well as “hundreds“ of slots and virtual sports. There is no mobile casino app “just yet,” but SkyCity invites customers to ‘pin’ the site to the home pages of their mobile devices.

The online casino is currently restricted to players who are both physically located in New Zealand and at least 20 years of age who can produce a local driver’s license or passport. Attempts to log on to the site from outside the country resulted in a message saying the site was “not yet” accessible from other territories.

The site also says that it is “not currently” connected to SkyCity’s brick-and-mortar casino operations in New Zealand, as they’re part of the same family of companies but “operate independently.” So balances held in a land-based casino account can’t be transferred to the online casino and vice versa.

SkyCity announced its pact with GIG earlier this year, while noting that it was currently not illegal for Kiwi punters to access internationally licensed online gambling sites. The company said it was only basing the site overseas “while the New Zealand government made decisions on regulation of the sector within the country.”

Last week saw New Zealand’s Department of Internal Affairs (DIA) launch a public consultation on how it should approach the online gambling issue. The consultation offers four options for how the government might proceed, ranging from the status quo – maintaining the local betting and lottery monopolies’ limited range of online products – to a more open market that would license international online operators.

SkyCity responded to Stone’s comments by saying it was “obliged to have strict anti-money laundering programs in place” and that the company reports “a variety of transactions to the police to assist in combating financial crime.”

In 2014, some SkyCity high-rollers were among the individuals caught in a New Zealand police operation that targeted a methamphetamine smuggling ring. Police later convicted one of these VIPs on drug charges but SkyCity said it was “extremely comfortable” that it had done all it could to observe its AML responsibilities.