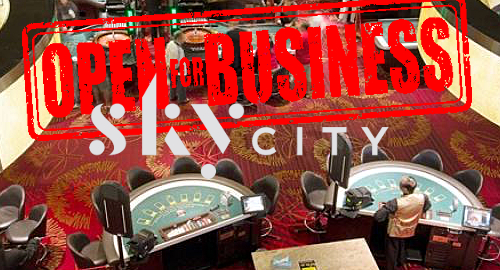 New Zealand casino operator SkyCity Entertainment Group will reopen its three domestic properties on Thursday (14) after getting the all-clear from the government.

On Tuesday (local time), SkyCity announced that the government would be downgrading to COVID-19 Alert Level 2 as of Thursday, clearing the way for SkyCity to reopen its casinos in Auckland, Hamilton and Queenstown under its new Health Management Framework.

To keep a lid on crowd numbers during the reopening frenzy, SkyCity has essentially developed a ‘no riff-raff’ policy for the first few days. For example, the Auckland casino will only be accessible by SkyCity Premier Rewards Gold, Platinum and Black members until Sunday afternoon, after which all Premier Rewards Members will be allowed in.

SkyCity Hamilton, which does about one-tenth the business of Auckland, is taking a slightly more egalitarian approach, allowing Platinum and Black members exclusive access only from midday Thursday to 4pm, after which the hoi-polloi will be allowed to sully the place with their presence. The Queenstown venue, which barely does any business and therefore can’t afford to discriminate, is apparently open to all Rewards members from the get-go.

SkyCity will allow new customers to sign up for its Rewards program on the spot in order to gain entrance. The members-only rules, along with on-site facial recognition technology, are intended to help SkyCity utilize contact tracing should any individual later test positive for COVID-19.

The main Auckland and Hamilton gaming floors will be segmented into distinct ‘zones’ to ensure no more than 100 individuals (guests and staff) are in a static location at any one time. Slots will be appropriately configured to ensure physical distancing and there will be unspecified caps on the number of players allowed at each gaming table (and no “back betting” permitted).

Restaurants will limit group bookings to 10 patrons and under, while on-site bars will remain closed until May 21 in keeping with government guidelines. Hotels will also be accepting reservations for check-ins at mid-day Thursday.

SkyCity CEO Graeme Stephens said both guests and staff should feel confident that the company’s “comprehensive plan” to keep them safe will prove up to the task. Stephens thanked customers for their understanding and said the company was looking forward to welcoming them back, although not with open arms, because that’s not allowed anymore.

Stephens is likely just grateful to be able to change the narrative around SkyCity, which only the day before had announced the imminent layoffs of another 700 staff. The company warned that it would be “a smaller, domestically focused business” once it reopened and Tuesday’s announcement isn’t likely to forestall those layoffs.