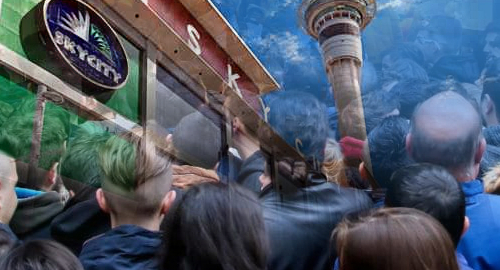 New Zealand casino operator SkyCity Entertainment Group is celebrating the country’s lifting of all COVID-19 restrictions on public gatherings, while the nation’s racetracks are still wondering if they’ll have warm bodies in their betting booths this week.

On Monday, the New Zealand government announced that the country was officially moving to COVID-19 Alert Level 1 effective at midnight after health officials reported the last known individual infected with COVID-19 had recovered. It’s been 17 days since the country reported a new infection.

The shift to Level 1 means the elimination of nearly all pandemic-related restrictions, paving the way for what Prime Minister Jacinda Ardern called “public events without limitations,” including thousands of fans packed into sports stadiums.

Ardern also declared that both retail and hospitality operations are “back without limitations.” SkyCity, which has been operating under pandemic restrictions since its May 14 reopening, announced Monday that “over the next few days,” all its New Zealand casinos (with the exception of the Wharf in Queenstown) “will return to normal hours as will the majority of SkyCity’s restaurants and the Sky Tower.”

SkyCity CEO Graeme Stephens couldn’t hide his excitement at the opportunity to flex all the company’s muscles, saying “it will be fantastic to be busy again and able to have the public enjoy the many different facets of our properties.”

That said, PM Ardern warned the nation that the country would undoubtedly see new infections down the road and Stephens said the company “remains committed to maintaining robust health and safety standards” and would encourage customers to continue to utilize the government’s COVID Tracer app.

The Level 1 designation doesn’t impact the most crucial aspect of SkyCity’s operations, its Asian VIP aka ‘International Business,’ as New Zealand’s borders remain shut to everyone except citizens and residents. Even those chosen few must self-isolate for 14 days after entering the country, so SkyCity will have to rely on its local customers for the foreseeable future.

Speaking of, Stuff reported last Friday that SkyCity had requested an additional 60 video poker machines at its SkyCity Hamilton property in exchange for closing down three of its blackjack tables. SkyCity reported last week that its VIP-free table game operations had gotten off to “a slow start” while electronic gaming had been “very pleasing.”

The New Zealand Gambling Commission rejected SkyCity’s request, saying it “would have the effect of permitting an increase in opportunities for casino gambling.” SkyCity had previously sought permission to operate on a no-table basis at its Hamilton and Queenstown venues but this request was withdrawn after word got out and anti-gambling critics accused the company of targeting local residents.

Meanwhile, New Zealand TAB outlets are still grappling with the decision by the Racing Industry Transition Agency (RITA) to trim 30% of TAB staff due to COVID-19. While racing punters are expected to return to the stands in droves this week, some of them are likely to be thrown for a bit of a wobbler when they try to place a wager.

The New Zealand Herald quoted Cambridge track boss David Branch saying RITA’s cost-cutting moves will mean a lack of human betting staff for almost all race meetings save ‘elite carnival days.’ Punters will have to make do with self-service betting terminals (SSBT) or use the TAB mobile wagering app.

Branch expressed concern that many track-goers, particularly those of advanced age, have never used an SSBT or betting app. The expectation had been that audiences wouldn’t be allowed back in the stands for another couple months, but Monday’s Level 1 announcement has forced a frantic timetable adjustment.

The Herald reported that RITA was now considering a slower SSBT rollout to allow a more orderly technology transition. But as of Monday, Branch was still in the dark as to whether there’d be humans in the betting booths by Thursday’s off.