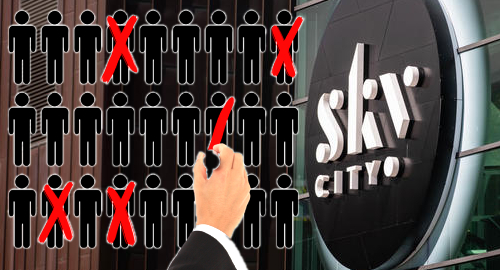 Casino operator SkyCity Entertainment Group is laying off hundreds of staff in New Zealand after the COVID-19 pandemic forced the closure of all five of the company’s gaming venues.

On Friday, SkyCity CEO Graeme Stephens issued a statement noting the “unprecedented impact” on the company now that its four properties in New Zealand and its venue in Adelaide, Australia were forced to close their doors to prevent further spread of the COVID-19 coronavirus.

Stephens said the resulting monthly revenue loss will be around NZ$90m (US$53.2m), while the company is still incurring significant monthly costs, including around NZ$20m in labor costs alone.

SkyCity has already stood down “around 90%” of its Australian workforce, and will now make around 200 of its New Zealand salaried staff redundant “with immediate effect.” The company has also asked waged staff to “cut to 80% of normal wages,” a request that, if not agreed to, would force SkyCity to make around 700 more redundancies.

SkyCity’s leadership team have volunteered to take salary cuts “ranging from 20%-40%” for the rest of the fiscal year, with Stephens and the company’s CFO and COO taking the 40% hits. SkyCity’s board of directors have volunteered to cut their fees by 50%. The executive cuts will help establish a NZ$1m Employee Hardship Fund to help exiting staff cope with redundancy.

SkyCity is also reducing capital expenditure, with all New Zealand projects save the in-development Convention Center and Horizon Hotel project in Auckland on hold until the casinos reopen. The ongoing expansion of the Adelaide property will continue as planned.

Stephens noted that this was “an incredibly stressful time” for all concerned but Stephens didn’t rule out further cuts if SkyCity’s casinos remain closed by June 30 “and/or travel restrictions remain in place for an extended period.”

Stephens warned that the COVID-19 impact “is not limited to the short-term consequences of closure.” While the company’s Asian VIP segment might recover “reasonably quickly” once travel restrictions are lifted, SkyCity expects that “weaker economies, lower personal disposable income and changed entertainment habits … will result in us recommencing as a smaller, domestically focused business.”

SkyCity’s cost-cutting moves follow Aussie rival The Star Entertainment Group, which laid off 90% of its staff following the pause in its operations. Crown Resorts has yet to announce what measures may be necessary to help the company survive the shutdown.

UK racing back behind closed doors, casinos’ backs “to the wall”
Steven Stradbrooke
17 hours Ago