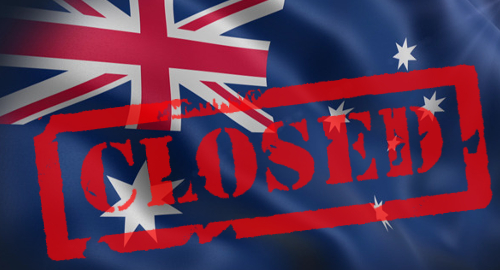 Australia’s gambling operators are in full damage control mode after the government ordered their venues to close for up to six months to contain the COVID-19 coronavirus outbreak.

On Sunday, Australian Prime Minister Scott Morrison ordered all bars, restaurants, clubs and casinos to close their doors by noon on Monday. The closure, which is intended to minimize further spread of the coronavirus, is set to last “at least six months,” dealing a possibly mortal blow to the nation’s casino firms.

Crown Resorts, which was forced to close its Melbourne casino’s main gaming floor this weekend after losing its exemption from coronavirus-related containment measures, said Monday that its hotels would continue to operate “in a reduced capacity” but all other activities were effectively toast.

Crown suspended trading in its shares last weekend ahead of its Melbourne announcement, a move that was followed on Monday by rival The Star Entertainment Group, which said its trading halt would last until Wednesday. Reports emerged this weekend that customers at The Star’s flagship Sydney casino weren’t abiding by the company’s stated social distancing policies.

SkyCity Entertainment Group, the New Zealand-based operator which also runs a casino in Adelaide, announced that it was closing that venue and withdrawing its earnings guidance for the current fiscal year based on “uncertainty as to the duration of the closure.”

SkyCity said its domestic casinos would remain open for the time being, but warned that it was “preparing for the potential closure of its New Zealand properties” should the government raise the COVID-19 Alert Level beyond its current ‘level 2’ designation.

TABCORP RUNNING OUT OF OPTIONS
Aussie lottery and betting operator Tabcorp Holdings issued its own announcement acknowledging the shutdown of hotels and clubs, which will impact its TAB betting agencies in those venues. However, Tabcorp noted that convenience stores and other outlets from which it sells its lottery products appear likely to remain open, at least for the time being.

While Tabcorp said it hopes customers will now flock to its digital channels, the shutdown of major sports events means digital bettors don’t have much on which to wager. On Sunday, both the Australian Football League and National Rugby League announced the suspension of their current seasons at the government’s direction.

Tabcorp noted that horse and greyhound racing was still going on behind closed doors but “their ongoing status may require further clarification from relevant state governments.” Tabcorp said the full impact of its virus-related adjustments is unknown and thus it wasn’t in a position to offer specific guidance on its future earnings.

POKIES OPERATORS CRY FOUL OVER RENTAL DEMANDS
Tasmania’s pub and club owners are protesting the fact that they’re being asked to continue making rental payments on their video poker (pokies) machines despite the fact that the pubs are now closed and the machines are no longer accessible.

Local media reported that the Federal Group, which holds a monopoly on pokies operations in Tasmania, had offered to forgive leaseholders’ charges on Keno operations but pokies rent would still need to be paid “due to [an] ongoing commitment to pay these lease agreements with banks.”