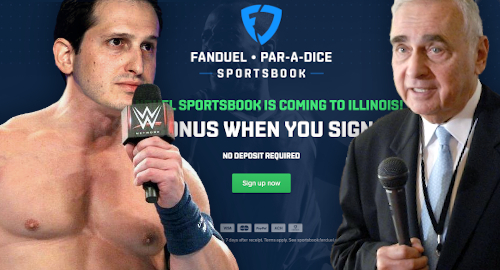 Illinois sports bettors are being urged to sign up now ahead of FanDuel’s imminent arrival, while Illinois is urging two other betting operators to stop acting like they’re characters on WWE Raw.

FanDuel is aiming to launch online betting in Illinois ahead of the kickoff of the new National Football League season, which officially gets underway on September 10. All FanDuel needs now is for its land-based partner, Boyd Gaming’s Par-A-Dice Casino in East Peoria, to receive its ‘go live’ signal from the Illinois Gaming Board (IGB).

Boyd filed its application with the IGB on August 19, and given the regulator’s usual two- to three-week processing window, FanDuel may be waiting right up until the Texans and the Chiefs start smashing helmets before it’s legally allowed to accept any Illinois wagers.

Regardless, FanDuel is urging bettors to register ahead of time, especially since the state is once again allowing bettors to register online without having to confirm their registration at a betting site’s land-based partner venue. However, that window of opportunity may only last until September 19, depending on who whispers what into Gov. J.B. Pritzker’s ear.

DraftKings CEO Jason Robins issued a tweet this Monday expressing joy at once again being able to register customers online, adding “especially after the corrupt idiots at Rush Street Gaming tried to block us in the state.” Robins deleted the tweet later that day.

Robins (pictured left, apparently after eating twice his normal amount of Wheaties) appeared to be blaming Rush Street boss Neil Bluhm for being behind Pritzker’s late-July decision not to renew the in-person registration exemption that he originally introduced in June. Bluhm (pictured right) is also suspected of being the genesis of the restrictions in Illinois’ betting laws that are making life so difficult for online-only operators.

The enmity between the firms dates bubbled to the surface in mid-2019, when DraftKings and FanDuel ran TV commercials in the state blaming “a casino owned by a billionaire” for using its “legal muscle to box out the competition.” The ads were withdrawn at the request of Pritzker, who reportedly felt the stakeholder squabbling might derail efforts to pass the betting legislation.

Rush Street responded to Robins’ Monday missive by noting that the company “has never been asked to leave a state, pays taxes on every wager, and has not been named in multiple consumer class action suits.” Geez, just wait until the NFL’s a couple weeks into the new season and Robins and Bluhm agree to square up in the parking lot outside Soldier Field at high noon, although they’ll probably be packing lawyers instead of zip guns.