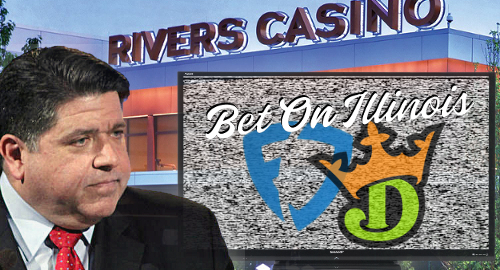 Sports betting operators DraftKings and FanDuel have pulled ads targeting an Illinois casino operator at the request of the state’s governor.

On Thursday, a new DraftKings- and FanDuel-supported advocacy group calling itself Bet On Illinois (BOI) launched a video ad campaign calling for equal opportunity to apply for the state’s proposed sports betting licenses.

On Friday, BOI announced it was suspending its ad campaign, which had pledged to spend $1m in the remaining week or so that the Illinois legislature has to pass its proposed gambling legislation. BOI spokesman Marc LaVorgna said the ad was “suspended for the time being” at Gov. J.B. Pritzker’s request “while we engage in productive discussions to deliver smart sports betting legislation” before the current session concludes.

While the video never mentioned his name, the ads targeted Rivers Casino Des Plaines operator Neil Bluhm (Rush Street Gaming) for supporting amendments to the betting legislation that would put ‘bad actors’ such as DraftKings and FanDuel in a three-year betting ‘penalty box.’ The sites stand accused of offering daily fantasy sports in the state despite the attorney general’s 2015 opinion that DFS was illegal gambling.

The Chicago Tribune quoted Pritzker (pictured) saying Friday that he was “very much in favor of passing the gaming bill,” but that’s a seemingly Herculean labor that the state has to date proven profoundly incapable of handling.

Still, pols continue to tweak the legislation in the hope of finding an acceptable compromise. Legal Sports Report reported Friday that Rep. Mike Zalewski was preparing yet another amendment that would scrap that three-year penalty box in favor of a blanket 540-day ban—starting the day the legislation took effect—on any operator offering digital wagering.

Zalewski also wants to charge some truly exorbitant license fees, including $25m for online-only licensees, of which there could only be two. The maximum seven land-based betting licensees would be dinged $10m apiece, while existing casinos, racetracks and off-track betting parlors would have the option of paying $5m or 5% of their adjusted gross betting revenue.

Land-based licensees would be limited to a single online betting brand, and that ‘skin’ license will cost $5m. All betting operators would pay 20% tax on their revenue. Honestly, it’s like Illinois isn’t even trying anymore…

Speaking of not trying, Tennessee Gov. Bill Lee informed local legislators Friday that he will honor his pledge to allow his state’s online-only sports betting legislation to become law without his signature. (A missing chapter of Profiles in Courage, obviously.) But Lee reiterated his threat to veto any other gambling expansion efforts that legislators might dare pursue, such as allowing the dens of debauchery known as casinos.