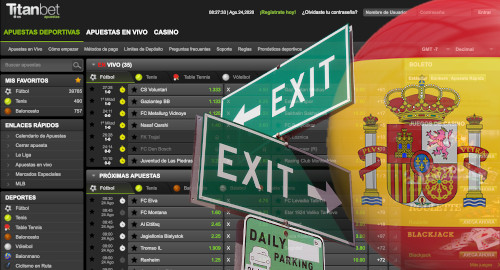 Last week, online betting affiliate Legalbet reported that TitanBet.es had informed its customers that it would be closing as of September 14. No new customers will be allowed to register with the site and it will stop accepting new deposits from existing customers as of September 2.

The site has recommended that customers withdraw their account balances by September 14, although customers who fail to clean out their accounts by that date can still access their funds by contacting TitanBet’s customer service department.

TitanBet didn’t specify what prompted its decision to exit Spain’s regulated online gambling market. It appears to have been a fairly recent decision, as the site renewed its Spanish license in February for another five years. The site was among the first to be registered when Spain launched its regulated market nearly a decade ago.

Spain recently previewed strict new limits on online gambling advertising and sponsorship activity, despite loud protestations from locally licensed online operators. The current plan is for the new rules to take effect in October. It remains to be seen if any other operators plan to follow TitanBet to the exits before these new rules kick in.

Playtech clearly hasn’t given up on the Spanish market entirely, as it recently announced a deal to provide its live roulette product to the Spanish-licensed division of Flutter Entertainment’s Betfair brand.

Playtech was among the companies that established a subsidiary in the Spanish enclave of Ceuta, which offers an online gambling tax rate that is half the 20% imposed on companies based in Spain proper.

The online gambling sector in Ceuta and its sister enclave Melilla is currently under investigation by Spain’s National Intelligence Center (CNI) as well as intelligence services in neighboring Morocco for allegedly serving as a conduit for payments to foreign agents.

A report in El Español said the CNI opened its investigation after a Moroccan businessman arrived in Melilla to collect €50k he claimed to have won on an unspecified gambling site. Moroccan intelligence reportedly became suspicious due to the man’s apparent lack of any real history of gambling activity.

The intelligence services reportedly suspect that the €50k was payment for passing information to an unspecified Turkish company, possibly related to plans to construct a luxury tourism project in the Nador region of Morocco.