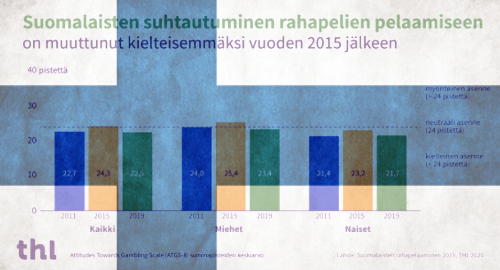 Negative press surrounding Finland’s Veikkaus gambling monopoly appears to be souring the nation’s youth on the appeal of gambling, according to a new survey.

On Wednesday, Finland’s National Institute for Health and Welfare (THL) released the results of a 2019 survey (in Finnish) that showed Finns’ overall view of gambling had a score of 22.5 on the Attitudes Towards Gambling Scale, below the ‘neutral’ score of 24 points. The previous survey in 2015 showed gambling trending slightly positive at 24.3 points.

That said, while strong majorities of Finns believe gambling shouldn’t be encouraged (91%), that there were too many gambling opportunities (71%) and gambling posed a threat to family life (61%), strong majorities oppose a gambling ban (79%) and continue to believe people have a right to gamble when they want (61%).

Finland was previously awash with 18,500 slot machines in retail shops, restaurants, gas stations and other venues, all of which were run by Veikkaus. However, a mounting backlash forced the company to announce plans to eliminate around 8,000 of these machines by 2025.

Apparently that wasn’t fast enough, as Veikkaus announced this month that it now plans to hit that new 10,500 slots maximum by the end of this year. The company will also institute a hard cap of no more than four machines at any single point of sale starting January 2021.

Veikkaus was forced to halt its land-based operations in March due to COVID-19 but the company plans to reopen its Casino Helsinki, Feel Vegas and Pelaamo arcades this Friday (26) while slots outside dedicated gaming venues will follow suit on July 15.

Those decentralized slots will be subject to reduced hours of operation, starting no earlier than 11am and shutting down by 4am at the latest. The restrictions will last until the new compulsory identification verification rules take effect next January. The machines will also alert slot jockeys as to the time they’ve spent playing every 15 minutes.

The THL survey found that over half (52%) of respondents supported an end to decentralized slots, up significantly from 37% in the 2015 survey. Two-thirds of Finns supported mandatory ID verification for slots versus just 15% who stood opposed.

Already dealing with criticism over its reliance on land-based slots, Veikkaus scored a PR own-goal last summer thanks to a radio ad campaign that critics claimed was making light of problem gambling. More recently, Veikkaus came under fire for awarding a lucrative no-bid contract to its long-time tech supplier International Game Technology.

One year ago, a survey found only 31% of Finns supported ending the country’s state-run gambling monopoly in favor of a more open-licensing model. The latest THL survey found support for the monopoly remains high at 72%, although that has fallen five points since 2015.

And a greater number of Finns (36%) oppose government proposals to block access to internationally licensed gambling sites than support such plans (29%), while one-third were ambivalent on the subject.