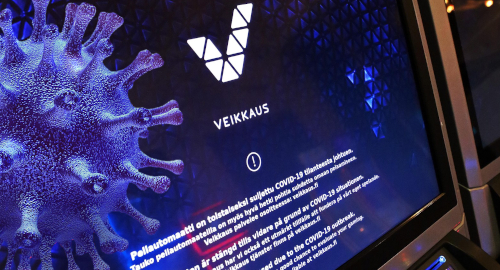 On Friday, Veikkaus announced that it was launching ‘cooperation negotiations’ with its retail staff regarding “potential temporary layoffs, rather than permanent personnel cuts.” The layoffs would affect around 800 staff, many of whom could face an idle period of up to three months.

The announcement comes following a series of alerts regarding the monopoly’s retail slot machine network as well as its own gambling halls. On Monday, Finnish medical authorities declared that pandemic infection rates in the Central Ostrobothnia region had entered an “accelerating phase,” leading Veikkaus to shut its local retail operations.

On Wednesday, the same acceleration was detected in the regions of South Karelia and South Savo, leading Veikkaus to announce the immediate suspension of retail operations in the affected areas.

Veikkaus senior VP Channels & Sales Jari Heino said Friday that COVID-19 had “driven the entire society to the wall” and the company’s main focus had to be “the health of our employees and customers.”

Heino added that there was no indication when the shuttered retail operations might reopen, so the negotiations with staff are intended to “realize the best possible plans and solutions” for all concerned.

The closures will further reduce Veikkaus’ 2020 revenue forecasts, which were already projected to come in €300m below previous estimates. Veikkaus has been trying to lessen its reliance on its land-based slots by promoting its digital offering, which unlike the land-based operations has stiff competition from internationally licensed sites.

Veikkaus’ land-based operations may be a revenue winner but they’re also the source of much of the company’s PR problems. (Finns are among Europe’s biggest per capita gambling spenders and Veikkaus slots collect most of that.) Veikkaus has accelerated its timetable for reducing its total machine count from 18,500 to 10,500 by the end of this year, while slots jockeys will be limited to account-based play starting in January.