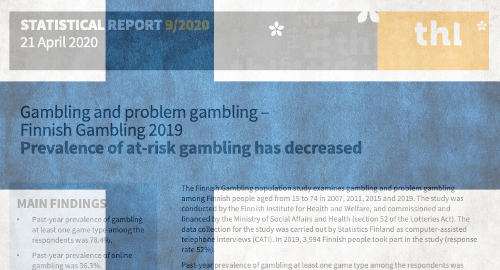 Online gambling participation in Finland rose nearly 13 percentage points over the past four years without any corresponding rise in overall problem gambling rates.

A new study released last month by the Finnish Institute for Health and Welfare (THL) queried nearly 4k residents on their gambling activity during 2019, a follow-up to similar studies conducted every four years since 2007. A second report later this year will address public attitudes and opinions toward gambling.

Veikkaus accounted for 87.5% of all gambling spending in 2019, but this figure dips to 83.6% in terms of online spending. The three most commonly cited reasons for patronizing international sites were: better odds and return rates, higher potential winnings and a broader product selection.

Despite the online activity increase, problem gambling rates fell 0.3 points to 3%, while the more serious pathological gambling prevalence rate was flat. Moreover, the percentage of those deemed ‘at risk’ of becoming problem gamblers decreased from 15% to 10.7%.

Online gamblers were more likely to demonstrate problem gambling behavior but these individuals were also far more likely to (a) gamble several times a week, (b) use at least four different gambling products, and (c) gamble both online and offline, which suggests that online participation is a symptom more than the cause of their problematic behavior.

In fact, in terms of Veikkaus’ offering, individuals who played slot machines in the monopoly’s offline mini-casinos reported significantly higher problem gambling prevalence than those who played slots on the Veikkaus site.

In a further bit of irony, problem gambling prevalence was highest among weekly gamblers whose habits included visiting the website of PAF, the gambling monopoly in Finland’s autonomous Swedish-speaking Åland Islands. PAF has taken a number of steps in recent years to reduce its reliance on gambling whales, despite the initial impact on the company’s bottom line.