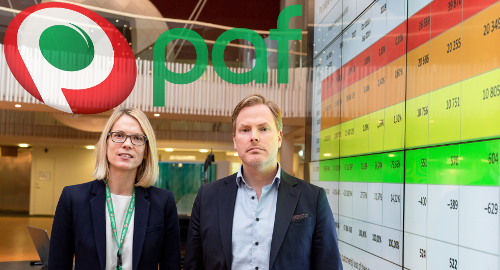 On Thursday, Paf, which holds a monopoly on gambling in Finland’s autonomous Swedish-language Åland islands region, announced that it would cut its existing €30k annual loss limit for online customers to €25k – for a rough average of €2k per month – starting January 1, 2020.

The annual loss limit was among several responsible gambling initiatives Paf introduced last year. These initiatives brought about a major reduction in high-volume customer spending, which had a corresponding effect on Paf’s revenue.

On Thursday, Paf CEO Christer Fahlstedt said the company wasn’t content to “pat ourselves on the shoulder when we have done something good” if there was still more that Paf could do to ensure that “none of our players should be able to lose their house or their home.”

Fahlstedt (pictured right) said the loss limit reduction was based on the “terrible conclusion” of new research from Stockholm University, which found that the ability for customers to set their own voluntary limits is “worthless and does not work.” By contrast, Fahlstedt said loss limits imposed at the company level was proven to have “a real effect.”

The Stockholm study, which involved around 4,300 randomly selected Paf slots players, concluded that a one-time prompt for setting voluntary deposit limits “had no effect on the gambling intensity” of customers. The study showed “no significant difference in net loss” among groups who were prompted to set a deposit limit at various stages of the process of creating a new Paf account.

Fahlstedt said the new lower loss limit would further reduce Paf’s revenue by around 2%, or around €2m per year. Fahlstedt acknowledged that it was “not good to lose revenue, but we are doing well as a gaming company and I am sure that our customers appreciate the position we have taken.”

Paf has set a goal of having “no big players” in the company’s database by next year, and Fahlstedt said the latest figures show high-rollers now account for just 0.08% of Paf customers. Paf’s deputy CEO Daniela Johansson (pictured left) encouraged other gambling operators to follow Paf’s lead.