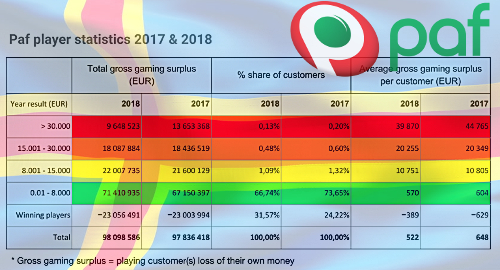 Finnish gambling operator Paf has taken the bold step of publishing its annual player statistics, while pledging to further reduce the volume of business it generates from its high-value customers.

This week, Swedish-language gambling operator Paf, which serves Finland’s autonomous Åland Islands region, published its players’ annual wins and losses over the past two years, part of the company’s quest to reduce its reliance on revenue generated from high-rolling gamblers.

Last September, Paf began rolling out fixed annual loss-limits for its online customers, imposing a hard cap of €30k that CEO Christer Fahlstedt claimed at the time would reduce the company’s annual income by around 5%.

This week’s stats show that Paf’s revenue from high-rollers was down €4m to €9.65m, but this shortfall was made up by a 24% rise in active customers, particularly those at the lower end of the spending scale. Revenue from players who wagered less than €8k last year was up over €4.2m to €71.4m.

Fahlstedt called the reduction in high-roller revenue “a lot of money. But it is unsustainable money that we no longer receive and which the whole gaming industry should say no to.” Fahlstedt said the industry needed “a genuine debate” on the fact that most online operators rely on a tiny slice of customers who have “an enormous impact on [companies’] operating results.”

Paf’s loss limits will be fully implemented by 2020, and Paf also plans to implement a system that will restrict its ability to market its products to customers whose online activity approaches the ‘lower risk zones’ of problem gambling behavior. In practice, Paf says this will double the amount of its customers who won’t be sent any form of direct marketing.