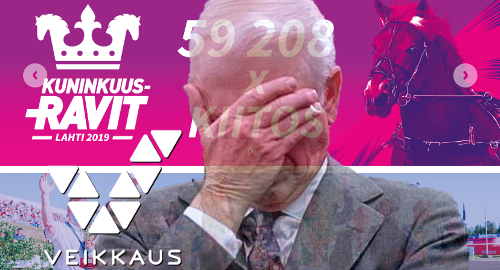 On Tuesday, Veikkaus CEO Olli Sarekoski issued a statement saying there was “no reason to deny the facts. We have made mistakes.” Sarekoski was referring to a series of radio spots in which a therapist suggested individuals seeking thrills should try wagering on horse races.

The ads featured characters who crave thrills and winnings, and wondering if those cravings were ‘okay’. A therapist character replied that these impulses were normal and said an outlet for ‘satisfying’ these cravings would be to go down to a racetrack or log on to the Veikkaus site and place a racing wager.

The ads coincided with the annual Kuninkuusravit ‘royal’ harness racing championship, which ends this weekend. Veikkaus said Tuesday that it had temporarily pulled all of its ads from TV, radio, print, online, outdoor advertising and social media, with the exception of spots promoting its mainstay lottery operations.

Sarekoski said the company was “sorry for the anger we have caused” and the company was taking “every effort” to prevent similar cockups. This includes hiring outside consultancy Tekir to study the company’s marketing processes, focusing on “the smallest details of where we need to improve.”

The marketing halt will last until the end of September, by which point the results of the study are expected and “corrective action” will be taken. The company claims that a “new normal” of marketing will then take effect.

But Veikkaus’ marketing efforts have also come under fire from Finland’s National Institute for Health and Welfare, which claimed the monopoly’s gambling ads were “at odds with public health communication” regarding other potentially “harmful products” such as alcohol and tobacco.

Last month, a Veikkaus ad that likened playing its Keno product with drinking coffee was called out by Finland’s National Police Board. On Tuesday, Finland’s government overseer of state-run companies said there was “some room for refinement” of Veikkaus’ marketing activity.

Veikkaus controls virtually all facets of gambling in Finland following the 2017 merger of the country’s three standalone gambling monopolies. But recent surveys have shown Finns are increasingly dissatisfied with the limited legal wagering options, stating a preference for a more open and commercially competitive licensing regime.