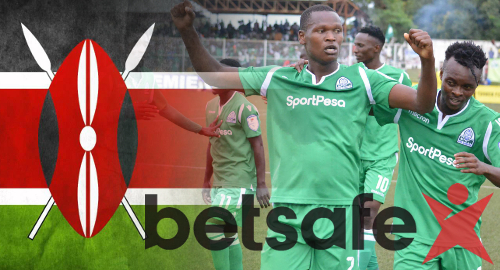 Online gambling operator BetSafe is looking to make a splash in the Kenyan market by addressing a major football sponsorship void.

The deals, which will see the BetSafe logo appear on both clubs’ shirts, are worth a combined Ksh95m (US$894k) per season, with reigning league champions Gor Mahia getting the lion’s share (Ksh55m). The deals were done through BetSafe’s new Kenyan offshoot Bet High Kenya Ltd.

Gor Mahia chair Ambrose Rachier celebrated his club finally securing “long-term financial support from a strong and safe partner.” Similarly, AFC Leopards chair Dan Shikanda said the deal “gives us a sense of security and work peace to be able to focus even more on becoming the best team in the country.”

Both clubs were previously sponsored by local betting operator SportPesa, which shut its Kenyan business last year after getting into a punch-up with the government over back-tax claims. Last August, SportPesa cancelled all its local sports sponsorships for the second time in as many years, citing the “uncertainty” of the regulatory climate.

The club bosses’ relief is palpable, as SportPesa’s exit from the local sports scene left both Gor and Leopards on financial life support. Gor reportedly hasn’t paid its players in five months.

Kenya boasted the continent’s most prosperous online betting market  before the government chose to redefine how its betting licensees and their customers were to be taxed. The market-leading SportPesa was not alone in deciding Kenya was no longer hospitable, as runner-up Betin shut its Kenyan operations around the same time.